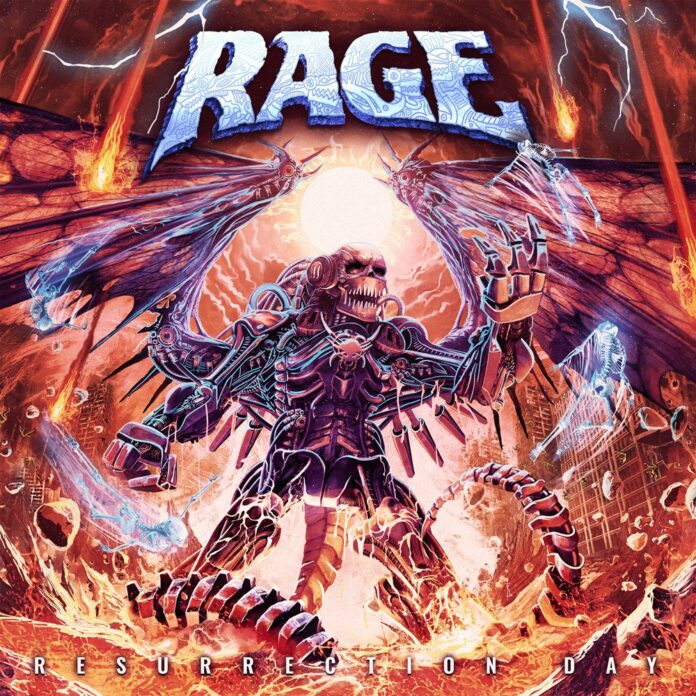 I don’t know if Peter “Peavy” Wagner ever played the game Football Manager – where essentially blokes who were old enough to know better tried to pretend they were boss of a team – but he’s certainly following my lead from back when I did.

See, I was never arsed with tactics “gerrit forward” is how I see the game (with due respect to those who like to play “good football”) but good grief I loved buying players. I used about four million every season.

Your man Peavy, he’s surely cut from that cloth. Three albums with the same line up was quite enough, thank you (and if you’ve got a spare hour, nip to Wiki and have a look at the “personnel” section”) so he’s shuffled the pack on “Resurrection Day”. Out has gone guitarist Marcos Rodriguez, but its how he’s been replaced that’s the proper interesting thing here. In came Stefan Weber but then he was joined by Jean Bormann. That means the best metal band on the planet outside the huge monoliths from the “New Wave” 40 odd years ago, now have two guitarists and that always makes for fun, doesn’t it?

Away we go then, because Peavy never lets you down and he isn’t about to here either, because – we’ll just say this now to save time – “Resurrection Day” is immense.

I am a mixture of contrasts. Like, I can’t stand Game Of Thrones or any sort of “epic” film, but give me a metal record that starts with a bit of classical stuff and I am wittering about “gravitas”. Anyway, this has an overture, which is ace, but even better its got a title track which is power metal how power metal should be. It’s massive, it’s overblown, its chorus soars and it would still beat any other power metal band to death with their own shoes.

Then it shreds and has a groove that Lamb Of God would kill for – that’s a track called “Virginity”, and it thrashes. “A New Land” though, that’s the big one. Oh lord, yes. Epic. Gallops, and catchy? It’s got the lot and it sees Peavy giving it his best Dio too. All other metal bands that aren’t Priest, Maiden or Saxon, take note. This is how you keep metal relevant.

“Arrogance And Ignorance” is as heavy as it gets. There’s even a bit of Machine Head in the guitar work. It’s one of a few that concern themselves with societal issues, as though there’s a lot of anger to work through.

“Man In Chains” does the half prog near ballad intro that all metal bands love, before exploding, and if “Age Of Reason” does it again then fair play, everyone loves it.

“Monetary Gods” leaves you in no doubt whatsoever what Peavy thinks of our leaders. The contempt with which the lyrics is spat is not hidden, whereas the 80s style fists in the air fun of “Mind Control” is just a damn good time.

“Travelling Through Time” has a bash at one being one of those “folk metal” things – you know the ones, where they look like trolls – or at least does for about 45 seconds before it lays waste to such an idea and salts the earth under the bridge. It does sound a bit like a Gloryhammer song, mind you, without the goblins.

We’ve had a bit of fun with this, but lets be sensible for a second. Listen to the balladry of “Black Room”, and the social conscience of “Extinction Overkill”. Those last two songs are everything metal can be. Brilliantly played, grown up and filled with power and ….rage. Or is that last bit too on the nose?

I am absolutely convinced that Rage are the best kept secret in metal – which is mad considering this album is getting on for their 30th in very nearly 40 years – and if it sees them finally being spoken about in the way they should be, that is to say as true visionaries rather than mere “defenders of the faith”, then that’s what they deserve.

Any football fan knows that getting the new players to fit in is the hardest thing to do. Peavy Wagner does it every single time. “Resurrection Day” is a band reborn (again).