BAND OF THE DAY: STILL EIGHTEEN 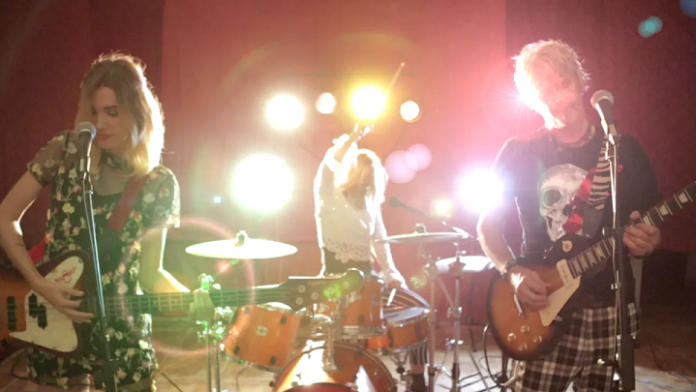 fter the release of their debut EP (“Bullets to Dust”, 2016) and several singles (“You Hit Me Like a Drug” and the accompanying music video went viral on Facebook with thousands of shares and over 1,000,000 views), canadian alternative rock band Still Eighteen come back with a song inspired by a trip in Italy: “Piazza Cavour”.

Still Eighteen is a distinctive band, formed by former Platinum Blonde and Trixie Goes Hollywood singer and guitar player Joey along with his wife Karen on drums and their daughter Samantha (co-lead singer and bass player).

Somebody said that their music is like if David Bowie meets Pixies.

Chosen from thousands of bands to perform live at Roxodus music festival with Aerosmith, Alice Cooper, Lynyrd Skynyrd, Kid Rock, Billy Idol and other legends, Still Eighteen are non-conformists and questioners of the status quo: their songs tackle topics like war, greed, poverty, and environmental degradation.

“Piazza Cavour”, their new single, is a song where Led Zeppelin’s hard rock meets italian history, bringing us to a time where women were hanged and burned to death for witchcraft.

«In my research, I discovered that in Piazza Cavour, in Bormio, witch trials had taken place throughout the 16th to 18th centuries. I had stood in the very place where the accused met their horrific fate. We went to the church of San Gallo and walked about the “Fields of Justice” where the women were “hung in the gallows”. I felt that these women had entrusted me with their unthinkable history and were urging me to tell their story».

The bond between Still Eighteen and Italy is strong, so much that they has had the pleasure of performing in Italy for several years, headlining live club such as Legend Club (Milano), Hard Rock Café (Firenze) and Mattorosso.

«We are so sad that we had to cancel our European tour for early 2022 due to Covid travel restrictions. We were so excited to perform “Piazza Cavour” live for Italian audiences! The good news is that we are working on organizing a European tour instead for the summer of 2022».

Still Eighteen may be the only world-class alt-rock band of its kind. The band consists of a father, mother and daughter.
Along with their unique story, the band also has a unique sound – think David Bowie meets Pixies.
Still Eighteen shows and music ROCK – that’s why Still Eighteen was chosen from thousands of bands to perform a 50 minute set of their originals at Roxodus music festival with Aerosmith, Alice Cooper, Lynyrd Skynyrd, Kid Rock, Billy Idol and other legends.
Still Eighteen was also selected to be one of the showcasing artists in Sweden at the “Live at Heart Festival” – one of Scandinavia’s largest showcase festivals. Still Eighteen was also chosen to be one of the artists at Canadian Music Week Festival 2021 and was named one of the ten best Canadian artists to see at Canadian Music Week by FEMMUSIC magazine. Still Eighteen was able to finish their European tour just before the borders closed in March 2020.
The members of Still Eighteen consider themselves to be non-conformists and questioners of the status quo. This attitude is reflected in many of their songs that tackle topics like, war, greed, poverty, and environmental degradation. Emerging Indie Bands Blog dubbed the band a “rock protest trio”.
However, not all of Still Eighteen’s music follows these themes. For example, their light-hearted song, “You Hit Me Like a Drug” and the accompanying funny music video went viral on Facebook with thousands of shares and over 1,000,000 views.
Still Eighteen includes former Platinum Blonde and Trixie Goes Hollywood singer Joey, along with his wife Karen on drums, and their daughter Samantha is co-lead singer and bass player.
Initially a fan in the crowd, Karen caught Joey’s eye at a Toronto-area gig and instantly knew he was “the one”. Over the course of dating, marriage, and having their daughter, the pair had long dreamt of living life at a more tropical pace, specifically in the Dominican Republic, having explored the island on rusty, rented motorcycles during multiple vacations. Their life-changing move to a small, coastal town in the D.R., best known for its kite-surfing (their favorite sport), had a profound effect on the whole family. “It really expanded our world view”, Karen recalls. This new perspective ignited Joey’s creative inspiration and his songwriting flourished.
With such free and musical spirits at the helm, it was predestined that Samantha would catch the musical bug; at age eight, she started an all-girl rock band, Crush, and frequently opened for Joey’s band across island gigs. She started playing bass and writing her own material in her pre-teens, with her skills expanding to co-writing status alongside her dad.
In the meantime, Karen’s many years of exposure to the music world throughout Joey’s music career — and now it being her daughter’s passion — was the catalyst for Karen becoming a serious drummer.
Still Eighteen was born!