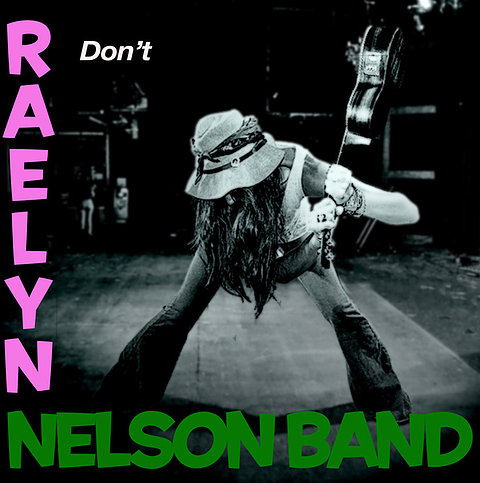 Here’s the thing. The cover gives it away. The Clash homage. Whatever this is going to be, it is – surely – going to have a Punk Rock edge.

Then, you read a little further into the bio.

“When they aren’t writing or recording”, it says, “The Raelyn Nelson band are on the road taking their high energy live show to the people. Having shared the stage with such diverse musical acts as country superstar Tim McGraw, indie rock icons Drivin’ n Cryin’, legendary punk band Descendents, and supergroup Hard Working Americans.”

And what’s more, I am telling you right now, they’d fit in.

Wherever people like great songs, to be honest, they’d be right at home.

So, let’s get down to business, shall we? “Don’t” is ten songs. 30 minutes. iTunes wants to tell you it’s country. It is, kinda. But there’s many sorts of country, so if you want a hook, this is from the Jason And The Scorchers end. Country with the lines blurred and without giving a good God damn for conventions.

“Weed and Whiskey” to be fair, gets itself down to the Honky Tonk for a bit of a hoedown, but whatever else she’s doing here, Nelson isn’t apologising. “Don’t need your judgement or your pity” she sings here, and that’s great, because she sings it sweetly (and this just sounds happy – its stoned too, let’s not kid each other) you don’t even notice.

But its “Pieces” where you go…..”oh, ok this is different”, the name The Replacements kept coming to my mind, listening to this one, and the line “I am not trying to be anybody but me” seems apt.

“Nothing On” is about the most cheerful “I’ve been dumped” song you’ve ever heard, and its typical of the brilliant work here that she turns it into something so wonderfully singalong, and “Hating You”, which has echoes of the brilliant Speedbuggy 666, might well be the follow up? Dressed, and angry that she’s alone, maybe. Either way, Nelson is wonderfully feisty and I am not about to get on the wrong side of her.

Power pop is all over the mighty “Mama Cry” – probably the best of this altogether exceptional bunch – catchy? Oh, hell yes, while there’s a sort of knowing wink about “Good Time” that suggests you might want to leave her alone if she’s not feeling it.  To wit: “Cos usually when I am with you my heart just skips a beat, but lately all I wanna do is punch you in the teeth….” Sorted.

“About That” distils rock n roll to the most brass of brass tacks, and makes good, actually on those Joan Jett comparisons she gets, while “Everything Falls” is about as ballad-like as this gets, early REM is your starting point here. Country doesn’t sound like this.

“Texas” is a homage to the Lone Star State, and is much fun, and there’s another of the punk tinges, a thought that the screeching – and downright thrilling – “Rebel Girl” makes clear. This is not being aired at the Grand Ole Opry. It’s not about Nelson, apparently, but you imagine it might be. You almost hope it is.

So “Don’t”?  Well “Don’t” pigeonhole Raelyn Nelson. “Don’t” underestimate her. And “Don’t” – whatever you do miss this album if you think Country can be rebel music of all types.

Oh and in my case, don’t mention she’s Willie Nelson’s Granddaughter until the last line. It doesn’t matter that she is either, because The Raelyn Nelson Band aren’t superb because of her surname, they just happen to write fabulous songs.