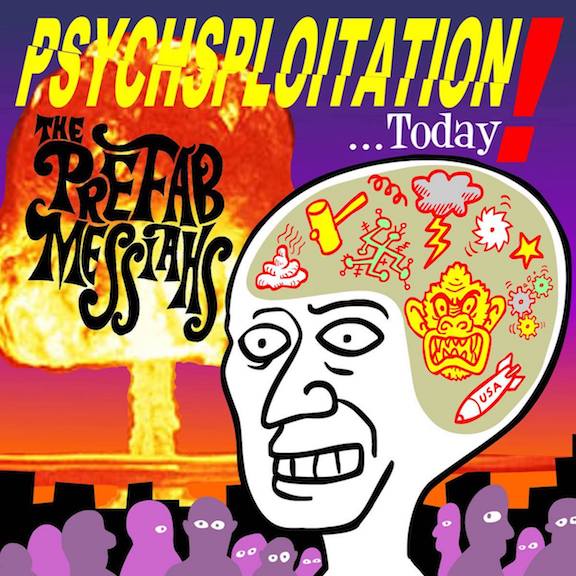 The Prefab Messiahs began as a proto-lo-fi post-punk left-field garage pop band associated with the “Wormtown” (Worcester, Massachusetts) punk/arts scene of the early 1980s. Originally together from 1981-1983, the band have got back together with Xerox Feinberg on guitar and lead vocals, Doc Michaud on lead guitar and organ, Trip Thompson on bass, synth and backing vocals and Mattyboy Horn on drums and backing vocals.

After getting back together, the fellas have released a new album entitled “Psychsploitation Today”

The first track on this opus is also the title track of the album “Psychsploitation” and it`s a real belter with a wonderful guitar riff opening the song up with some in your face lyrics of `You`ve really got a lot of nerve, to think you know what I deserve, I’ve seen you working overtime, to really raid my plastic mind` Joyous lyrics shared over some glorious `60s garage psychedelia. The chorus will have you humming along, I guarantee. A cracker of an introduction. “The Man Who Killed Reality” follows with a sort of `Born to be wild` vibe and some more great lyrics that mention Golden showers being rained down upon followers of a type of cult like figure.

If there`s a song that will raise your spirits, it`s “Sometimes Sunnydaze” it blends the best of bands such as The Beach Boys with The Byrds. Wonderful guitar inflections and some superb harmonies had me nodding my head and tapping my foot to this catchy offering. A more far out sort of driving song follows with “Everything U No” I can imagine cruising along on a sunny day with the top down on a car with this tune blasting out of the stereo, so the uninitiated can enjoy it.

“Gellow Mold” or maybe even as I kept saying mellow gold is a real laid back trippy offering, this had me happily drifting off almost to another dimension. The vocals are so sweet they`ll almost hypnotise you. Brilliant.

If I didn`t know better, I’d have thought that “Having a Rave Up” was a lost Rolling Stones gem, unearthed from some archive or other. A marvellous sixties inspired mash up. There was so much to enjoy in this song, some great keyboards, drums, guitar and harmonies. “Outtayerhands” with shouts of `Hey` and “Monster Riff” have some charming vocals, sweet melodies and delightful guitar interludes which marry post-punk, grainy psych and very left-field garage pop sensibilities.

If there ever is a song to really chant along to, it`s Warmsinkingfeeling” with the title repeated over a wonderfully trippy enthralling musical blend.

The final instalment is a quirky quite unnerving piece, but it is called “Last Day on Earth” and It`s the type of tune that wouldn`t be out of place in a Quentin Tarantino film. The song starts with air raid sirens and ends with what I can only assume is an atomic explosion. In between we get some wonderful musicianship and remote almost distant vocals.

I have to say I loved this offering from The Prefabs. Superb jangly and fuzzy guitars mixed up wonderfully with some interesting lyrics and dynamite organ pounding

I`m convinced that The Prefab Messiahs will become the Saviours of psychedelia inspired musical sensitivity.