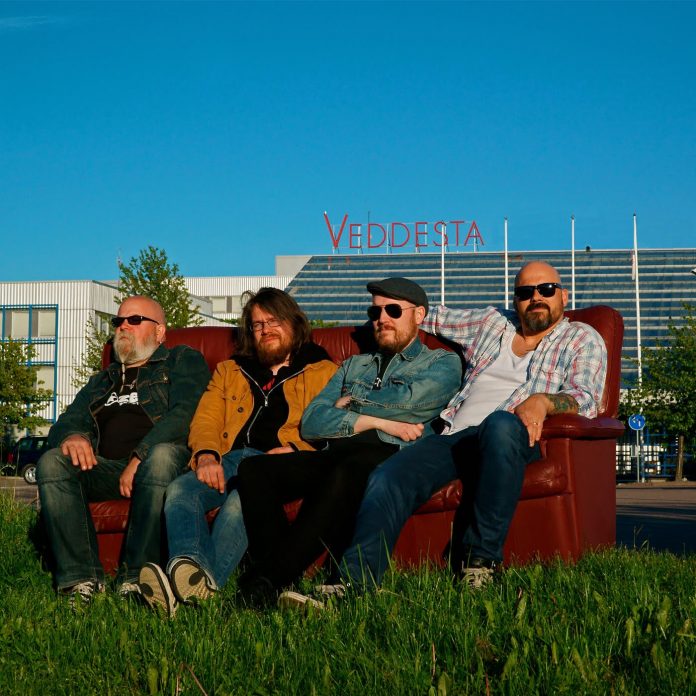 This, the third release from the Ponamero Sundown, is their first for a couple of years. We don’t know what they’ve been up to since 2013 (and given the dirty, fuzzed up sounds here it’s perhaps best not to ask) but it sounds like it might have been fun. Either that or there’s the other possibility that it’s been really dull and they couldn’t wait to get back in the studio to break from the tedium.

Because, “Veddesta” (named after the area of Northern Stockholm where it was recorded and the band had called home for years) sounds just about as gleeful as you can possibly imagine.

It’s seven tracks are infused with an energy, and with rock and roll sensibility that makes it a thing of rare beauty. “Bottom Of The River” builds up to its opening in a manner that suggests they’ve been planning it’s arrival for all of their downtime, and if it just about restrains itself, it doesn’t do so for long – for about two minutes actually – as guitarist Anders adds some fine lead to things.

“Hangman’s Trail” is more of the same, but perhaps allows itself more time to breathe, and the relish with which Niclas Engwall imparts its opening line: “I saw my face on a wanted poster, they said I shot somebody down” leads you to wonder if he actually has.

Elsewhere, “Restart My Heart” is a gloriously bassy rumble, and there is a pulsing electricity about “The Fortune Teller”, as well as a superbly catchy chorus.

That concludes side one. And you’d best believe that this is release with the vinyl market in mind. Made for losing yourself with your headphones on, “Veddesta” is only just getting started.

That’s because side two kicks off with a close on ten minutes epic and “Rhinostodon” is as fine a slab of heavy groove based rock n roll as there has been in 2015. Full of psychedelic intention (in the verses at least) it is a quite brilliant song, one which is counterbalanced nicely with what amounts to the boot to the face of “Broken Trust”.

Almost as if to remind you how good it is – and they are – Ponamero Sundown end “Veddesta” with “Dead And Gone”, which over the course of its seven minutes meanders between crushing riffery and pleasingly melodic verses with something approaching abandon.

All of which means that the album is one of the best of its type this year. If riff heavy, groove heavy rock n roll is your thing then, brother, we’ve just unearthed you a gem.

This is truly worth the wait.

Previous article
Featured Band: Canyon Of The Skull
Next article
Serenity To Make Some Noise