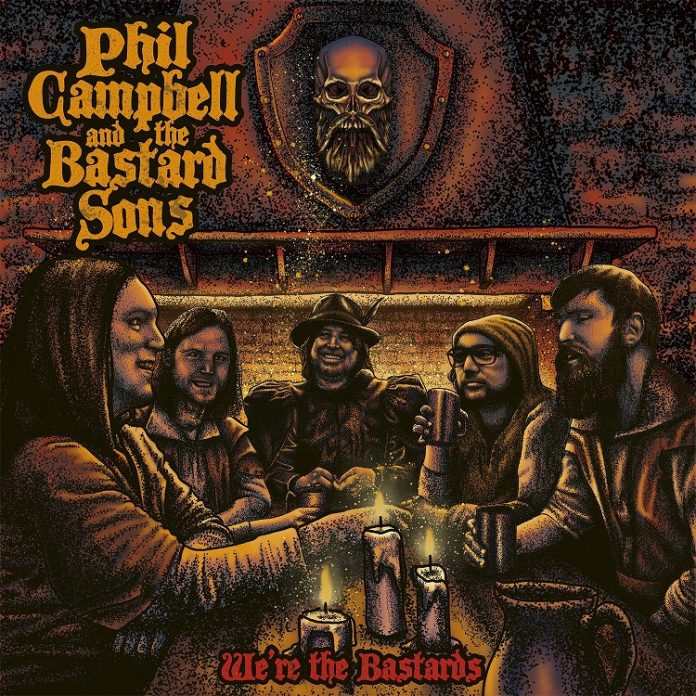 “Music is medicine, music is therapy.”

Anyone reading this who disagrees with the first line on “We’re The Bastards”, anyone who thinks music is only a way to get from point A to point B in their cars, will never understand not just the point of rock n roll in general but specifically what drives Phil Campbell and the Bastard Sons forward.

They’ll never understand why the four Campbell’s – Phil, Tyla, Dane and Todd – and one Starr get in the studio in lockdown and make this record. Those of us that live (note, not love) music will hear the joy with which Neil Starr screams “lets fuck this up!” before the guitar solo here and they’ll totally know that PCATBS are their boys too.

Most already knew this, probably. Their debut “Age Of Absurdity” record was fabulous, but the live shows were even better. On “…Bastards” they’ve harnessed that live power, and they’ve expanded their horizons just a touch too.

“Son of A Gun” thunders. The bass groove sweeps you along, and Starr continues his pattern of writing socially aware lyrics in hard rock songs. But the best thing about this band is that they don’t sound like anyone else, not really. And they always seem to be looking forward. “Promises Are Poison” is a modern masterclass, at a time when retro is cool, not here it’s not.

And at no point does anyone fancy being pigeon-holed. There was a song on the debut called “Dark Days” which didn’t sound like anything else they’d done, but it fitted in like a glove. That spirit seems to inform the whole of the follow-up. “Born To Roam” is filthy blues, while “Animals” is the one –  maybe – that sounds like Motorhead (and it is my firm belief that anything that doesn’t have a bit of Motorhead, AC/DC or Thin Lizzy in it, isn’t rock n roll at all…..) but crikey its good, and Dane’s drumming is mighty.

They understand groove. “Bite My Tongue” has one so sturdy you could hang your coat on it, to be fair (maybe your denim jacket with patches on the back would fit better?), they understand melody too. The harmonica drenched “Desert Song” sounds like something Aerosmith might have done on “Pump” – and it is noticeable this time how much of a stadium swagger is around, even though the lyrics are more introspective here: “you don’t have to hate me, I already hate myself” offers Starr and it feels like demons are being exorcised.

Make no mistake, though. Whatever this does, and wherever it goes, a good time is had by all. “Keep Your Jacket On” doesn’t so much as knock the door an wait for an invitation as smash it down, and although, when I was scanning the track list, I did wonder if “Lie To Me” might be a foray into some kind of balladry, It’s actually probably the heaviest thing here.

It seems almost trite to say it about Phil Campbell, but he and Todd can’t half find a riff. Every song here is built around one. More than one mostly, and they all sound like the most fun you can have. “Riding Straight To Hell” is played with a knowing smile, you just know it is. And I’m prepared to bet you right now that when they play live again, this will be the one they do the “splitting the crowd down the middle” bit in.

Pleasingly there is a real hard edge here. “Hate Machine” beats with a fast and furious heart, “Destroyed” is pure punk. “We say fuck you” the five of them yell. They are a gang. They are family. And they are not backing down.

The last one is a hint that anything went this time. “Waves” is a proper, brooding, slow building ballad, and peels away at some real darkness, it also proves that this is a band at the top of their game. The last one was brilliant, this one….well this one proves that they are one of the finest bunch of bastards in British Rock.