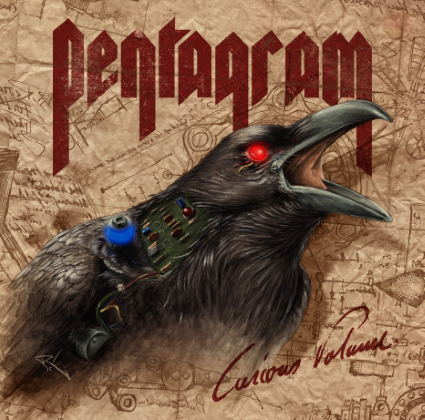 On which the doom kings do something pretty special

There’s a moment on a track towards the end of this album, “Close The Casket” to be precise, when you are listening to a song that sounds like it could be on Down’s first album. Then you think, actually, it’s Down that sound like Pentagram, not the other way around.

That even fans have to remind themselves of this perhaps says much about the way that this band go about their business. Their history is complex, suffice to say that the four year gap between “Curious Volume” and their last studio effort is nothing for a band that waited just the mere 14 years after forming until they actually got around to releasing their debut album in 1985, but the legacy matters not quite as much as the present.

And the present for main man and founder member Bobby Liebling, their rock throughout all these decades, is “Curious Volume” which means the here and now is pretty damned thrilling.

The album begins like it is just bursting to get out of the blocks. “Lay Down And Die” almost literally counts to four and then gets cracking. It’s nothing more and nothing less than a brilliant hard rock song.

One which, like much of “….Volume” is infused with a rare groove. Take “The Temper Push” for example. A real 1970s style cruncher, it comes equipped with the type of hook that Kiss constructed to build “Detroit Rock City” around, while the quite frankly monstrous “Dead Bury Dead” will have the likes of Orange Goblin saluting in solidarity.

There is a type of incessant insistence here, “Walk Alone” just throbs and pulses, but its “Misunderstood” that most surprises, three and half minutes that veers from punk rock intentions to sneering barroom blues it is a marvellous piece of music.

It’s also true to say that although there are a couple of moments here that you might describe as monolithic (the title track for one, and “The Devils Playground,” which very much sounds like the morning after the night before, is another) nothing on “Curious Volume” outstays it’s welcome and it’s a very short and to the point record, devoid of almost any fat whatsoever, none of its 11 songs hit the five minute mark, almost as if the point they want to make doesn’t require any complexities.

It all ends with an introspective track “Because I Made It” on which Liebling reckons “all dreams are stopped” and there’s “no peace now” before a wonderful guitar solo plays us out as if to say, “we might have made it but we ain’t going anywhere…..”

The biggest compliment you can pay “Curious Volume” is this: it doesn’t matter whether you know – or even care – about the history and legacy of this band. Quite simply, if you want to hear a brilliant rock n roll album it’s right here.