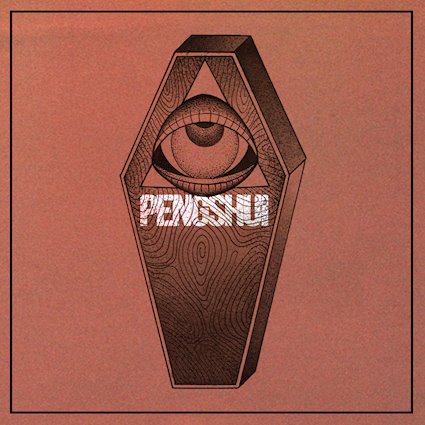 PENGSHUi are a raucous fusion of punk, grime, metal, bass, and beats, with a political and social message to communicate. This London-based trio comprise of MC/singer Illaman, drummer Pravvy Prav, and guitarist Fatty. Prav originally grew up as a heavy metal kid in Dubai before DJing jungle and drum ‘n’ bass in his teens. Guitarist Fatty grew up in Blackpool before studying jazz in Leeds and forming Submotion Orchestra and going on to play with the likes of grime duo Newham Generals and P Money. Frontman and MC Illaman meanwhile, was surrounded by reggae music his Jamaican grandfather would play before finding himself surrounded by the worlds of pirate radio, rap, rude boys, and skaters. His first band Flict would support Skindred and work with members of Cypress Hill during their nine years together.

The trio have a new album ‘Destroy Yourself’, released this month which touches on subjects that include politics, trauma, and personal growth. “We want your fucking chest to rattle,” laughs drummer Pravvy Prav. “If your chest isn’t rattling, then it’s not good enough.”

The album opens or explodes with `Break The Law` which features British grime MC, rapper, and songwriter P Money. It`s a track that is about breaking down the walls we often confine ourselves within. A band source has said “It feels like an anthem for the people that have had enough, enough of being lied to by those in power. Those that have had enough of holding themselves back.” It`s a storming stream of consciousness rapidly shared against a quite hypnotic backbeat. We have some blistering descending guitar riffs and pounding drums as this number progresses. A real scorching number to open on. I read that `Eat The Rich` was a class war call-to-arms. A tirade against corporate entities and their abuse of the poorly paid working class, who are almost modern slaves with uniforms. The chorus almost has that “Fuck you, I won’t do what you tell me”  vibe that Rage Against The Machine smashed in `Killing In the Name Of`.

The fellas have stated that `Little Brother` is about what we would say to the young versions of ourselves. A reflective outpouring on not forgetting where you`ve come from delivered against a mash up of grinding guitar riffs and pounding drums. There`s a brief section that becomes spoken word and the last minute of so becomes a cacophony of controlled aggressive noise. We almost have a Friday the 13th musical box sound leading us into and throughout `Ain’t No Love`. A number that relates to fitting in as an MC in the UK. We enjoy breathtakingly speedily shared rapping, some more carefree musings along with crunching guitar riffs and pounding drums in this glorious journey.

I loved `Move The World` which was a kind of no nonsense headbanger of a number. It was mostly sung as opposed to rapped with it`s sort of resonating ode of passion and love where there was so much emotion expressed in the vocal delivery. A number, I admit I played repeatedly. Frontman Illaman almost roars about his childhood growing up in hardship on an estate in `I`m Sick` with friends dying and struggling with addiction. The word sick can be used by a younger generation to be a positive term but here it equates to mental health struggles and this composition really communicates that despondency. The finale of the song is a challenging listen.

`This Is My Youth` is in essence a list of Illaman’s favourite things from the present and his childhood. To me it was kind of urban poetry with stuff like Nik Naks, xbox one and ackee and saltfish all getting namechecked in the verses as it developed and the catchy chorus of “This Is Me, this Is My Youth” that will go down a storm at a live gig. The concept behind `Ursa Minor` was genius. Ursa Minor, an alien, comes of age and gets to take his ship out for its first spin. He comes across Earth and as he gets closer notices the damage and destruction the human race are doing the planet. He decides he is going to wipe us out and reset. It`s number that ebbs and flows from rapid fire rapping to more reflective opinions as it evolves and then back again.

The frontman admits that `IDKWYBT` was written about one particular weekend when everyone was out and getting on it. The MC`s mates’ nicknames were used in the lyrics but then they decided to change them to horse names from the races and delivered the number like a horse race commentator. The late Peter O’Sullevan, it`s not but the video is class. I hadn`t a clue as to what `Shellers` was about but then found a quote from the fellas “Shelling is a term used for absolutely destroying a beat or track with flows and bars. That’s exactly what this one is: Illaman going the fuck in on a shelly banger. Straight-up smash. That’s it.” I can`t add much more but it has it`s quiet and loud moments throughout a mix of light and dark.

Title track `Destroy Yourself` according to the trio is “about breaking yourself down and taking yourself apart then looking at what feels wrong, what makes you unhappy, the addictions you have, the life and death, love and loss and allowing the lessons from all that to help you grow.”

Again, it is at times quite hostile then a little less so and maybe that`s a reflection as to what the guys are trying to convey in the lyrical content. The album closes out with Nothing Ever Changes` which is about letting go and making change. Revisiting past mistakes, relationships, learning from them and becoming someone, you love first. What stuck with me was that phrase `Nothing Ever Changes unless you make it so. It`s a tough listen lyrically but so worthwhile.

I would not have thought that this was my cup of tea but I`m so glad I decided to stick with it as it was rewarding not only lyrically but musically as well. There`s a lot of pain and emotion shared in this release but that only reflects as to how life is at times. If you like your music to not only challenge you intellectually but aurally. PENGSHUi with a soundscape of punk, grime, dub, and drum ‘n’ bass should be your go to guys!!