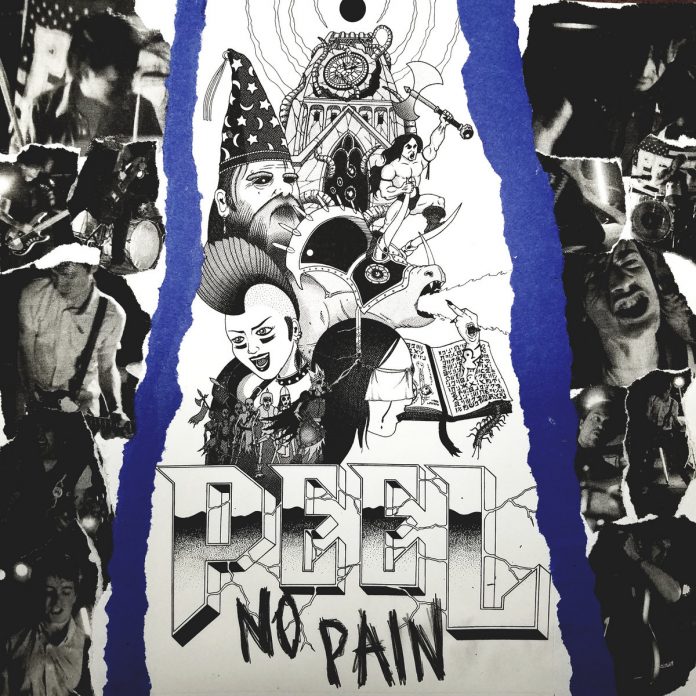 The other day, from out of nowhere, I heard of a band from Chicago called Peel. They had a new video out. I put it on the site. It was called “The Ballad Of Dougie Ramone” and its chorus went thus:

Over 85 glorious seconds of punk rock explosion, they have laid themselves bare. And pretty much, anyone who a) wants those things or b) lives with their dad, and writes music reviews about one of those three things, has some new poster boys.

“No Pain” is the fourth album that Pete, Dave, Jake And Kyle have come out of Chicago with, and basically if the following paragraph sounds like fun, get on board.

Peel are the energy, the aggression, the middle finger to everyone you’ve ever wanted to deliver one to. Over seven songs and 19 minutes, they give you an outlet for the escape you didn’t know you needed.

Which, I am well aware, is the sort of thing that normal album reviews end with, but there’s no rules here. Why? Because the first song here “King Of The Sea” has the chorus of “I am on a boat, I am fucking drunk.” Normal rules do not apply.

It starts with a scream of ebullience, and a riff that basically takes “Bohemian Like You” and speeds it up. And that sense of abandon never leaves the album.

“Kill The Kahlua” is like some great lost Honeycrack tune, “Say It Back” is even better, sounding something close to Faster Pussycat jamming with Thin Lizzy. So full of trouble is this that you don’t notice the downright bleakness in the words. Maybe that’s the point. Maybe it can’t be all bad if music sounds like this? Who knows? Peel, that’s who.

This is a pretty disparate record, in truth. There’s hints of Gaslight Anthem in the more blue-collar colours of “Highway Eyes”, but always with the hint that a punk song could cheerfully break out any minute.

The track does melody at breakneck speed, and you imagine that this is the sort of band who likes to capture their live sound on their records, and moreover that those gigs would be riotous affairs.

The final flourish here is the most ambitious. “Jazz Song” is like The Doors gone primal, and the use of some of Diamond Dave Lee Roth’s lyrics from “Panama” is a stadium rock diversion that no one was expecting.

But then, it’s the ones you don’t see coming that floor you, after all. And as this disappears into a haze (probably stoned?) that is a decent metaphor for the whole thing.

“No Pain” is fabulous, and appropriately for a band called Peel, there are many layers to explore.