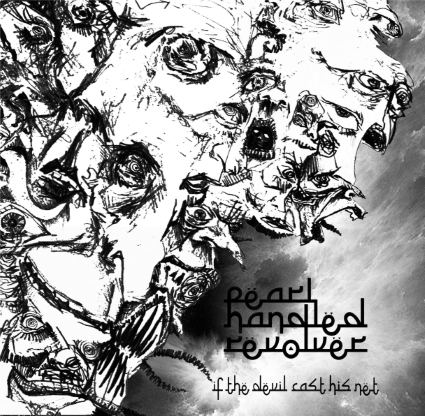 Bernard finds something to treasure

Pearl Handled Revolver is a new band to me but quite how they have slipped under my radar eludes me. Bedford based, this is the band’s third album proper (there have also been a number of EP’s) and it is excellent. I checked out some reviews of their earlier material and The Doors keep getting mentioned. I suppose any band that has an organ sound similar to Ray Manzarek will attract Doors comparisons but there is much more to the music than that. It is the sort of record where repeated listening pays dividends. Sure it rocks but it is no heavy rock album, think more Nick Cave in the way that it reveals its treasures.

Opening track ‘Help Me Down From The Trees’ is a great start, with swathes of organ and guitar kicking in as the track reaches its crescendo. ‘Don’t Throw It All Away’ is a bit more up tempo before ‘Someone Like You’ arrives. This track features more subtle keyboard work and mellow guitar licks. This leads to the title track, which for me is the stand-out song on the album. The slightly Tom Waits/Chris Rea vocal delivery is more noticeable on this song, the instrumental bridge starts around three minutes in and builds to a fantastic guitar/keyboard work-out for the rest of near eight minute long epic .

At volume this track really delivers and it is about as ‘heavy’ as Pearl Handled Revolver get. ‘Walk These Streets’ gives the listener a breather after the intensity of the previous track before the lead song off the album arrives. ‘Absinthe In Adelaide’ is another great song, very catchy with the repeated guitar riff and the rough-edged vocal delivery. ‘Loverman’ is the penultimate track and is Cave-esque in more than name and features more great guitar. Last track ‘Into The Blue’ is another long track but at nearly eight minutes it never outstays its welcome. More guitar riffing with a nice keyboard counter-point which builds to a full-on instrumental work-out similar to the title track, it’s superb and a fitting end to the album. So there you have it, Pearl Handled Revolver has made a great big grown-up album that rewards a patient listener and for that they deserve for it to be a success.