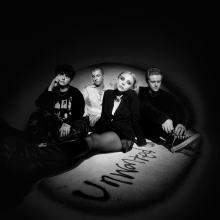 Pale Waves release their third album this month `Unwanted` and have said that on this release they  decided to embrace a “heavier” pop-punk sound by turning up the guitars” and getting “rid of the synths”. The group wanted `Unwanted` to be a fun, high-energy record to perform live. Lead singer and guitarist Heather Baron-Gracie has shared that it includes subjects that the band have never touched upon before, like loss, vanity, anger, jealousy, and hopelessness.

`Lies` leads us into this release and it`s a fairly fast paced number that put me in mind of Pendulum`s `Propane Nightmares`. It`s about a relationship that the singer had which became pretty toxic. Title track `Unwanted` is a lighter pop tinged offering that again refers to a friendship or relationship that seems pretty one sided.

`The Hard Way` begins as a ballad before bursting into a more anthemic offering towards the end. It was inspired by somebody who was bullied and committed suicide at the singer`s high school and her regret at not trying to help. There`s a more retro rock out on `Jealousy` which touches on the emotion of envy, insecurity, or resentment of somebody`s success or happiness.
`Alone` is an indie pop offering that relates to preferring to be single than endure the poisonous  relationship that the narrator has just left. There`s a kind of metaphor of longing for somebody as an addict would long for a drug with `Clean` and relating that they don`t want to let go of this habit. Musically it`s a pop number in the style of Hanson`s `MMMBop`

`Without You` is a ballad which will ensure lighters and lit phones being held up when played live. The band return to a much more direct indie rock composition with `Only Problem` that belts along with some fairly blistering guitar riffs.

`You’re So Vain` probably needs no explanation as to what it`s about and has a quite edgy texture musically. The vocals are at times breathy, questioning and a little intimidating. We have in `Reasons To Live` a fairly fast paced submission that blazes along and extols the virtues of a special somebody who gave you back your self-esteem, indeed your reason to live.

`Numb` is another ballad where the vocals paint a picture of openness and susceptibility but overall is pretty melancholic. Things brighten up with the bright and uplifting `Act My Age` which becomes fairly dreamy as it evolves.
This release closes out with `So Sick (Of Missing You)` which has a strummed guitar and is a fairly mid paced melodic piece which appears to be a breakup number.

`Unwanted` has all you`d expect from Pale Waves with sentimental anthems, singalongs, break up songs and plenty of emotional angst all packaged up with some catchy melodies and infectious rock outs.

Three albums in four years is pretty good going and Heather, Ciara, Hugo, and Charlie have delivered an album that is a little less synth based this time but i`m sure will have their fanbase screaming for more.