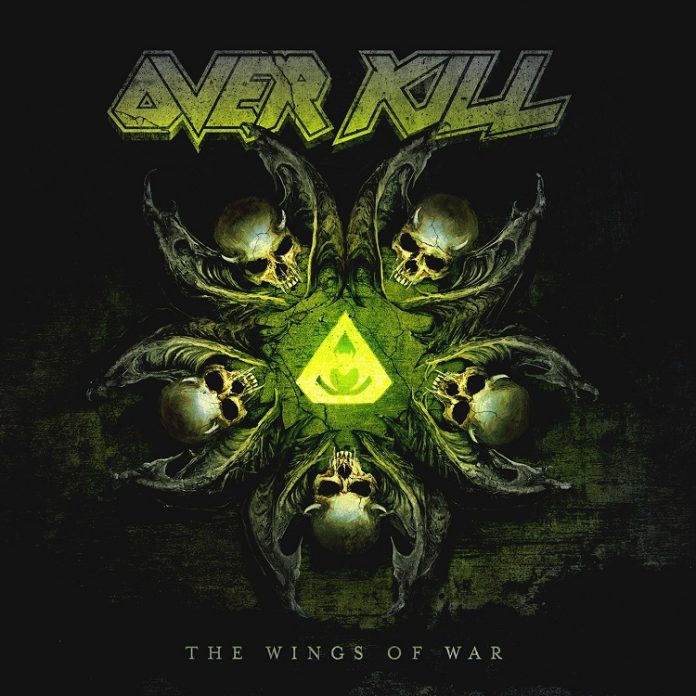 A thrash song, that starts with a sample of The Sopranos, you say? And finishes with a bit of a metal crack at “Born To Run”? Sign me up.

And that really happens on “Welcome To The Garden State” too, something of a cornerstone, I’d suggest of “Wings Of War”. Much fun is had during the romp, but amidst the knockabout stuff, there’s a serious message: forget your West Coast, brother, this belongs to the East.

In truth, there’s not many established thrash metal bands left that are still thrashing anyway, but as Bobby “Blitz” Ellsworth – Overkill’s inimitable singer – put it recently: “we’ve never had an identity crisis”.

And, certainly here they know exactly what they are from the get-go. “Last Man Standing” slashes, it seeps anger from every pore, and it is likely that it would get in the moshpit with you.

New drummer Jason Bittner (ex-Shadows Fall, Flotsam And Jetsam, Stigmata) pummels things here to welcome himself to the fold, and that one sets the tone in many ways.

“Believe In The Fight” is the work of men who know the struggle, “Head Of A Pin” is vicious, and for six minutes it owns the room. Crushing, but homing in on its targets with a laser-like precision. The hook line is simple: “when we finally get to heaven, absolved of all our sin,” spits “Blitz” who sounds like he’s on a mission here, “we will know how many angels on the head of a pin……”

If that one is the arguable highlight, then “…..War” is a consistent album with many great moments.

There is an unapologetic 80s vibe to the thrash here. “Bat Shit Crazy” is proud to dance the toxic waltz, you might say, while “Distortion” is one of those balladic sounding ones that you sort of know is going to get tasty, and it does. Building slowly, it has an ominous tone, a hint of threat and an air of violence that the best of this stuff always did.

It is noticeable as well that this is a lengthy record. 10 songs, over 50 minutes, so not here the almost punk moments of some thrash. “A Mothers Prayer”,  beginning with a bass groove from DD Virni – who along with the singer has been a constant throughout their near 40 year reign – is one of the shortest and maybe the sharpest here, but Dave Linsk’s solo soars.

“Where Few Dare To Walk” (and you don’t have to look too hard for a metaphor in the title) dials up the metal a touch, while “Out On The Road-Kill” has no thought of doing anything other than banging its head and getting all old school while its about it, and “Hole In My Soul” is absolutely thrilled to end in a maelstrom of real, “proper” (for want of a better word) thrash. If you like double kick drumming and solos, this is your boy to be fair.

As is the rest of the record. The cover art features five of the Overkill skulls and the suggestion is that you’d best not mess with anyone here, because you will come off worse.

There are those that like to mellow with age. Then there are Overkill. And for that, more than anything, you have to salute them.