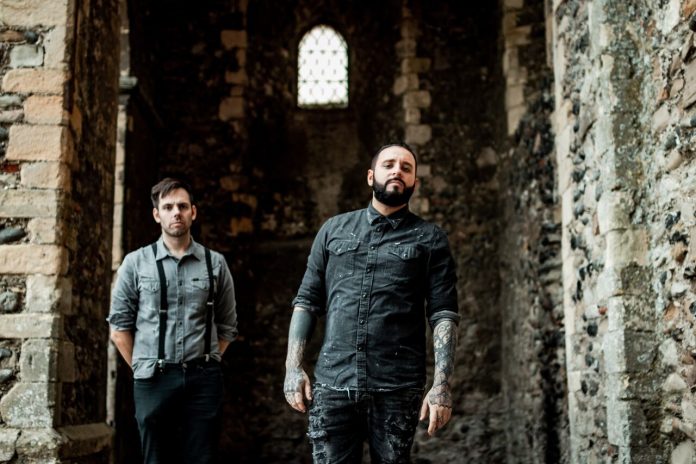 Continuing to drive a swathe of fresh nuances into their edgy, hard rock sound – one sharpened by early 2000s nu-metal influence – London hard rock duo Colt 48 are thrilled to return to the forefront and announce the upcoming arrival of their brand new EP – Negatives!

Marking the first steps towards the release of Negatives on 29th March, life-long friends Adam Jerome and Matt Savini have released a brand new video single torn straight from the heart of their upcoming EP. ‘Disconnected‘ perfectly encapsulates the undeniably sweet nostalgic undertones of Colt 48’s sound, and promises to thrill both returning fans and newcomers alike.

Vocalist and guitarist Adam Jerome’s distorted, low-slung and expansive guitar riffs push the core of ‘Disconnected’ deep into the listener’s mind, while his cleanly-sung vocal melodies carry a gravelly undertone that echoes the power and tonality of Wearing Scars vocalist Chris Clancy. It may come as little surprise then, to learn that Clancy himself lent his talents to the production of Colt 48’s upcoming EP, further adding to the throwback qualities of ‘Disconnected’ as it calls to mind the likes of Shinedown, Mudvayne and more.

Alas, as was the case with many nu-metal classics, the lyrical content of Colt 48’s latest single draws from somewhat darker corners of the human psyche….

“‘Disconnected’ zones in on the feeling that everyone is looking down on you, judging you and perceiving you as inferior. Moreover, these people might be trying to control you and dictate what you can or can’t do”, states Jerome.

Though undeniably playing off an initially bleak message, the frontman is quick to note Disconnected’s underlying positive message…

“This single is our way of telling the world exactly how those moments feel, but it’s also tinged with the knowing that deep down you’re strong enough to overcome it all and seek to accomplish great things. The video plays with this idea of disconnecting yourself from all the expectations of society and cutting yourself free from what holds you back.”

With a number of UK appearances scheduled for 2019 – including Brighton, Leeds and London’s Camden Rocks Festival, Colt 48 are excited to bring their latest single to the stage and push their already-epic stage show to the limits!

Says the band on the prospect of performing their latest single at their upcoming live dates: “‘Disconnected’ has such a huge sound and a solid groove throughout. We’re certain that you’re gonna love it!”

Friends for longer than they can remember, Adam Jerome (Guitar/Vocals) and Matt Savini (Drums) have always been heavily influenced by the churning low nu-metal sounds of SOiL and Korn, but with a love of melody a la Chevelle and Three Days Grace.

As Colt48, their EP’s ‘I’ and ‘II’ have helped them sell out London venues The Black Heart and The Borderline. In their short time as a band, they have opened for acts such as Puddle of Mudd, Ded, Glamour Of The Kill and Crazy Town and graced the stages of a packed out Electric Ballroom for their slot at 2018’s Camden Rocks festival.

Having spent the summer in the studio with Producers Colin Richardson (known for his work with Slipknot, Machine Head and Trivium) and Chris Clancy (of Mutiny Within and Wearing Scars) to record their new EP, they are excited to release the five track barrage of riffs, grooves and choruses to the masses.

Stay tuned for more on Colt 48!