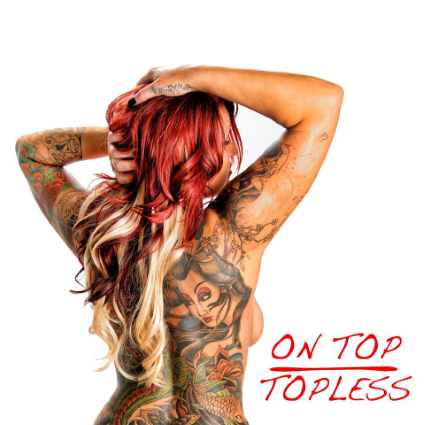 This four tracker is out digitally on 9th July. It doesn’t have, as yet, a physical release date. The rather odd juxtaposition to that is that in the days that most of the music this has at its heart was commonplace, digital didn’t exist. In fact, you – and by you I mean MVM’s writers – would most probably have had this on cassette and played the living shit out of it.

This Philly three piece have decided that the likes of Poison, Faster Pussycat, Skid Row and Ratt had so much fun 30 years ago that there’s very little reason that they shouldn’t join in too. Take the opening lines of “282.” “Running with the devil/Pedal to the metal/Its all about getting paid/ eyes on the gold/body’s been sold/at least you’re getting laid, so sneers Jaron Gullino, over a riff that takes Crue’s “Kickstart My Heart” as its inspiration and gets sleazier from there. If that doesn’t make it clear that we aren’t dealing with anything too taxing then nothing will.

This is the band’s third EP. It’s mixed by the same chap that mixes Lynch Mob’s stuff and this comes from roughly the same ballpark. “Go Crazy” is all swagger and dammit, if you don’t want to dig your old Johnny Crash records out and find some leather trousers by the chorus then you aren’t going to enjoy this too much.

Those of us that fancy a dip into the hard rock of old will find much to enjoy in the carefree filthy boogie of “Got Me Running?” and “Lie To Me” – thank Christ – manages not to be ballad and instead keeps the hard rock needle in the red.

Ultimately this this the sound of a band having great fun. It matters not that this sort of music hasn’t been vogue since Poison released “Flesh And Blood” because this four tracker will either act as fine nostalgia for those of us who lived through it and had the posters the first time around, or be an eye opener for anyone under the age of 35 who picks it up.

The sleaze rock revival starts here? Probably not. But this is a little gem.