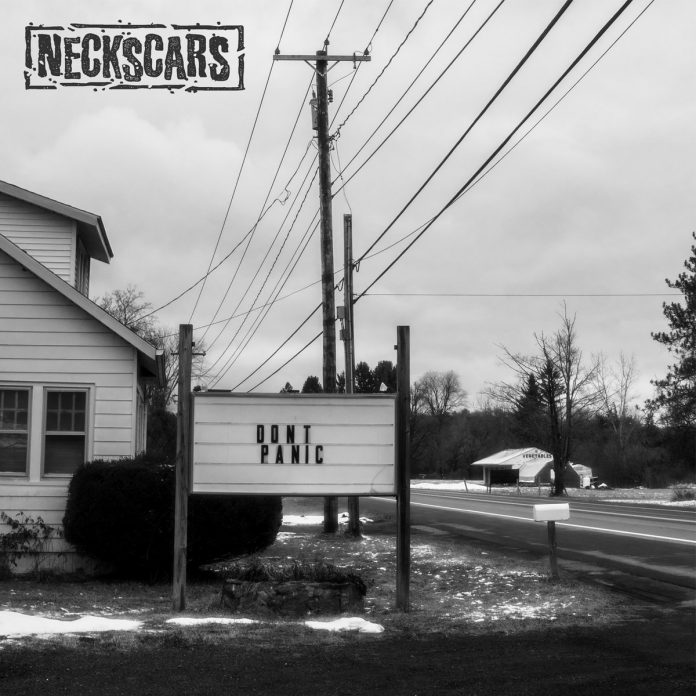 “I woke up this morning and my car was hit/I took a bat and swung it at my neighbours head.”

There’s no reason, really, to start this review with that line, beyond the fact you were not expecting it.

Anyway, my own desire for quirky lyrics notwithstanding, “Don’t Panic” is the debut record of what are described as “Downstate New York’s” Neckscars. I love that thing with US place names. I live in a fairly non-descript town about seven miles from Birmingham (where we invented Heavy Metal) and its never entered my head to call it “downstate West Midlands” but I digress.

In truth, this could only be an American band, European Punk rock never does what this does throughout its 31 minutes. Indeed, there is one name that you simply cannot avoid when discussing it, so we won’t: Hot Water Music.

One of those bands, who garner more critical plaudits perhaps than gold discs (seriously, though, if you don’t know the track “Mainline” from HWM’s “Exister” then rethink your life choices) nonetheless, the Floridians are a clear influence here.

You can hear it in the chunky punk of “In Front Of Me”, in the riffing of Will Romeo and Justin Parrish (who handle vocals too) and in the hooks. Each one of these has a hook, you sort of get swept along on the waves with them.

This is not some tribute act, though. Rather this is a skilled rock band. Listen to the way “Jarring” builds, and the way Romeo sings “I don’t know how I got home” with a real pride, and when they slow it down – as they do on “Unfinished”, then there’s more than a touch of Craig Finn and his boys.

Largely, though, they are all holding steady (see what I did there?) with an energy. “Not Enough JPMs” rockets along like prime Pkewx3 and I am going to guess that the shows these boys played before the pandemic were wild and raucous affairs.

“How did you get so temporary, how could you look me in the eye” yells Romeo (and with respect to him, you can’t call what he does singing) but as he does so, you are left with the overriding thought that what you are dealing with here is a band that has a mastery of the slogan.

The best records, of course, reveal more and more to you with each listen, and this does just that. By that I mean that if you scratch the surface, in amongst the moshpit inducers, there’s a real melody. “Loaded” could be on Ricky Warwick album, but then finds a pay off line of “I am sorry I was born”.

The band have a chemistry too, the bass of Colin Harte and the drums of Craig Sala are as integral, and the rough edges to the likes of “Running Man” are that of a biker rock band – which I reckon these could have been in another life.

There’s a heartland, almost Gaslight Anthem type groove in places too, like “Let You Down” would probably have the likes of Dave Hause and Brian Fallon looking on and sucking a thoughtful tooth, before the chopping guitar of “First Time, Long Time” bring things back to the home turf, if you will.

Like everything, the shadow of the pandemic is over “Don’t Panic.” The band made eight songs before the world shut down, cutting the remaining two when restrictions eased. That you can’t hear the join is all you need to know. Neckscars have found their sound. Watch them go.