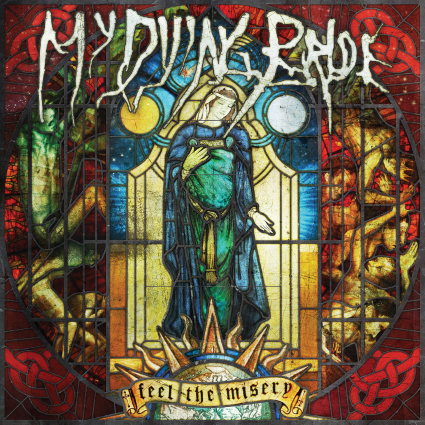 “Eight new compositions detailing the path of life through dark doors and the burdens we all must endure simply to make it to the end, My Dying Bride have returned with a foreboding new album which may enlighten, delight and consume the soul in one epic sitting.”

Those words above come from the band themselves. And you best believe they mean it. In fact, we can basically ditch any pretence here. This is essentially the darkest most miserable record you will hear in a long time. It’s also majestic, we’d best mention that part too in the interests of balance.

The majesty of thing – their twelfth studio record and one of their heaviest to boot – is almost immediately evident. If you call the first song on your record “And My Father Left Forever” you aren’t going to have it sounding like ‘Agadoo” are you? This is not a record for children’s parties – (unless of course your kid hates parties like MVM did, in which case, crack on).

“……Forever” is basically a masterclass in Northern Doom. The sort of cobble streets, wet with drizzle, windswept, epic music that their early 1990s contemporaries Anathema used to make, and Paradise Lost have just started to return to.

On this, the long standing axis of Aaron Stanithorpe and Andrew Craigan have been rejoined in battle by original guitarist Calvin Robertshaw, and there’s a real old-school feel about the absolutely incredible “To Shiver In Empty Halls” which takes in everything from growls to melodic vocal passages, pianos and two spoken word sections. Frankly there are more disparate ideas on this than many bands manage in a career never mind 10 minutes.

And rather fabulously the blackness and the bleakness is unremitting. “A Cold New Curse” rampages about somewhere between black metal and prog rock and takes its time to crush and unsettle you, but it, like everything else has to bow down to the almost balladic title track with its violins and Stanithorpe almost crooning over arguably the records heaviest riff.

“A Thorn Of Wisdom” is for this record almost some gentle light relief, and it’s choral touches add to the grandiose effects as the lyrics conclude: “I sometimes enjoy solitude.” No surprise there, really.

“Do not waste happiness” says the title track. Wise words. Don’t waste the chance to feel the misery either, because the dark side is where it’s at.