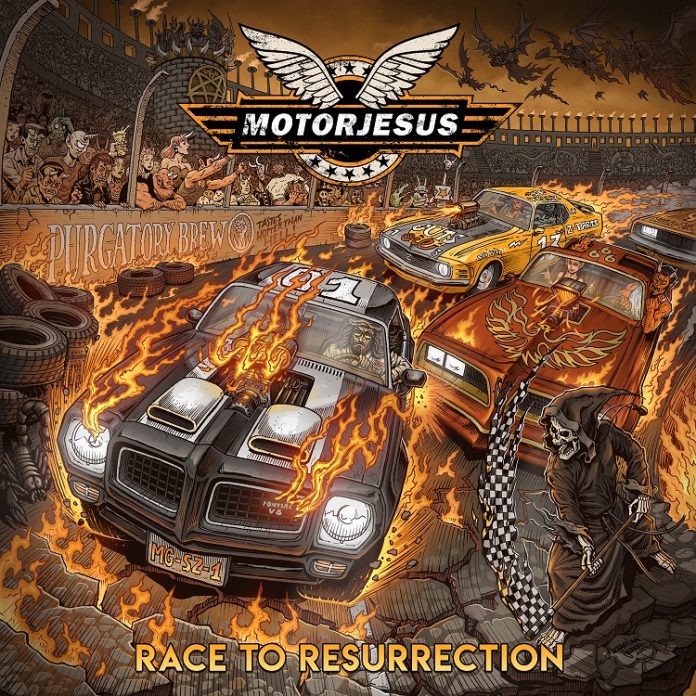 I’m not christened, as far as I know. What that means when the day of reckoning comes I have no idea, but I’ll take my chances. I do know that I have never in my life spent any time on Christian internet forums – until last week.

The reason? Well the reason is this slab of metal from Germany. Album number five from Motorjesus. I was trying to find out if they were God bothering or not. It was the name of the band that pricked my curiosity, you see, and the lyrics seemed a little bit, well, biblical. “The time has come to burn the bridges down to the ground and await the second coming anyway,” offers Chris “Howling” Birx on “King Collider” and there are countless other moments where, you could, if you wanted, invoke Stryper.

My investigations led to the conclusion that a) people on Christian forums are weird and b) Motorjesus constructed a character called Motorjesus, when they changed their name from Shitheadz and – shock horror – they like drinking so they can’t be white metal (I swear that’s a genre, I learnt that….)

Here’s another thing I learned from listening to “Race To Resurrection”. Frankly, it is so good that it can get down on its knees, recite the Lord’s Prayer and do whatever the fuck it wants, because it absolutely rules.

13 songs that sound like a muscular version of Adrenaline Mob (and Brix does roar in a kind of chest-beating Russell Allen way) who have been rifling through some NWOBHM albums with Corrosion Of Conformity for company. And if that sounds like the best band you’ve never heard, then yeah it probably is.

In the interests of full disclosure – call it confession if you wanna – I have no idea if all their albums are this good (I will find out after this) having never actually heard of Motorjesus before. One listen to “Tales From The Wrecking Ball” , though, and I was a disciple. Hell, by the end of the chorus of “King Collider” – after which, Gods truth I was punching the air in a traffic jam on the way to work – and I would have joined a cult in their name.

Helpfully, “Re-ignite” somewhere between Iron Maiden and Thin Lizzy at their heaviest, contains a line for the slackers: “try another way? Who needs all this trying anyway?” Amen, brothers.

Pick any song you like and you will find a riff so sturdy you can hang your coat on it, and you can happily get your double denim on and your horns up. “Speedway Sanctuary” – “I want to die at full speed” – races about, with proper urgency. “Casket Days” chugs like you wouldn’t believe and goes death metal in its hook – tongues are in cheek here too.

“The Infernal” sees them get all southern gunslinger on us, and if they are cowboys, then dammit, on a steel horse they’ll ride, because “Burning Black” isn’t taking prisoners or suffering fools. “The Damage” is full-on hard rock, turned up to 12 (11 surely isn’t enough….) and unashamed, and “The Storm” builds up a fearsome rumble that belongs in an arena, where it could kick Shinedown’s arse (come on, I haven’t slagged them this week so far.)

“Engines Of War” with its cowbell and filthy lead guitar is tonnes of fun, “The Chase” dares you to catch it in the fast lane – you wouldn’t – and its bass is so galloping somewhere even Steve Harris approves and the drums on “Running Out Of Time” belong on a thrash song, even if the rest of it has a resolutely hard rock feel.

“Awaken The Tyrants” is so bursting to rock that it begins with a solo – and has the type of lyrics you might find on a power metal cut, fathers and sons, protector’s of the realm, that sort of thing and also has a nice line in Prog too, as it builds to the end.

Look, I don’t know what all it means. I don’t particularly care. I just know a fabulous album when I’ve listened to it many more times than I expected to. “Race To Resurrection” deserves to save something. To paraphrase Gene Simmons, it commands you to kneel. Jesus, its good.