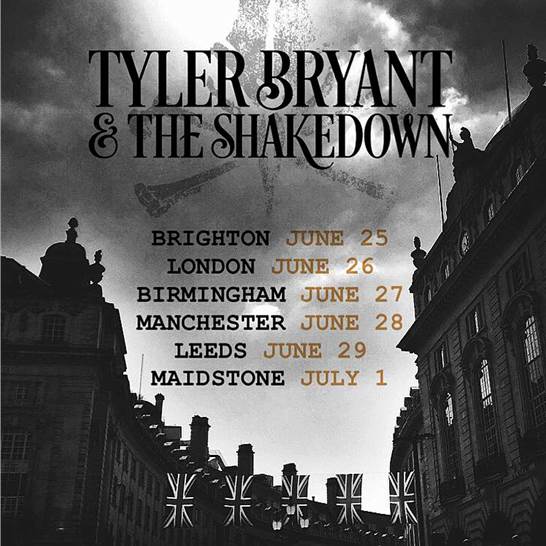 Texas guitarist, singer, and blues-rocker Tyler Bryant started playing guitar at the age of six, and by 11 he was good enough to jam with adult players, and it was clear what his future avocation would be.

He moved to Nashville during his senior year of high school (he finished his classes and coursework online and graduated after the move), and he has really never looked back, developing into an explosive and talented blues and hard rock guitarist, even playing Eric Clapton’s Crossroads Festival at the age of 15.

Along the way Bryant assembled a powerhouse band, the Shakedown, comprised of Caleb Crosby on drums, Noah Denney on bass, and Graham Whitford, the son of Aerosmith’s Brad Whitford, on second guitar. Quickly earning a buzz on the blues and rock touring circuit, the band opened shows for the likes of Aerosmith, B.B. King, and Clapton, among others, and released an EP, My Radio, in the spring of 2011, following it with a seven-track album, From the Sandcastle, in the fall.

A 12-track full-length, Wild Child, recorded in analog with engineer Vance Powell, appeared early in 2013. The success of Wild Child helped to land the group a deal with John Varvatos/Republic Records, who would put out their 2015 EP, The Wayside. The following year, they supported Guns N’ Roses on tour. In 2017, they returned with the eponymous full-length Tyler Bryant and the Shakedown released via Snakefarm Records.