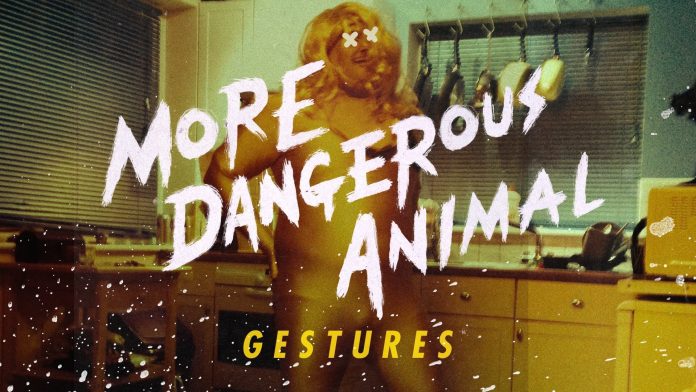 Classy debut from Brits to watch

Those that got there early enough to see both support bands when Fightstar made their glorious return to the fray in the spring couldn’t fail to be impressed – as MVM was – by the opening act, More Dangerous Animal.

The Suffolk based five piece had only been together for a matter of months in this form, but that MDA had considerably more class than most bands at that stage of their evolution rather betrayed the fact that they’d already been around the block.

MDA had in fact formed from the ashes of the hotly tipped Brigade, but reckon they began this new venture to keep things simple. On that, and so many other, levels “Gesture” scores big.

No frills and straight ahead rock is the order of the day here, but there’s some subtleties along the way on this brilliant four tracker. Opener “Them’s The Breaks” starts with a mighty riff, goes all quiet, melodic and restrained on us in its verses and the chorus opens up and goes off looking for some Biffy Clyro like horizon. It even manages to get all punky and aggressive before the end too, but the overall effect isn’t too far removed from “Polythene” era Feeder and not by co-incidence either, you suspect. The Producer of this record is the producer of that one, and Chris Sheldon has managed to bring out a real mid-90s sound here.

Sheldon – amongst some of the great records of the 90s and 2000s – had worked with Brigade and he clearly knows how to make the guys tick, because there’s a real feel that “Gestures” is a statement of intent, certainly “I Drew Dragons” is done through the gritted teeth, and features a real wall of guitars.

“My Answer Is I Don’t Have An Answer” picks up where Zico Chain leave off and features some superb guitar work, while the closing “Helios” is an interesting departure. The same sort of angular work of Therapy? (another of Sheldon’s charges, for the seminal “Troublegum” no less, as well as their recent work) if this is what we can expect from More Dangerous Animal then all we can say is more please.

MDA were on that Fightstar bill because Will Simpson from the band is Charlie Simpson’s brother. That said any bit of success they get from here on in is because they are superb. It’s been a year for some phenomenal EPs. Here’s another.