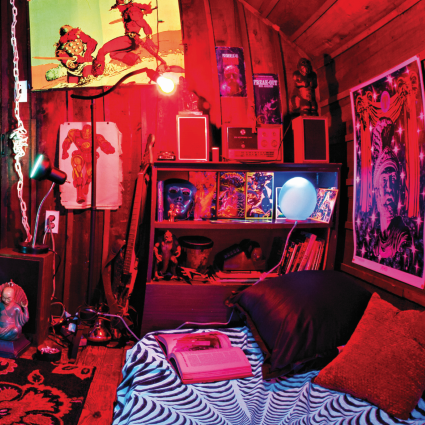 Dave Wyndorf is calling this the weirdest MM album yet. Strap yourselves in.

On the face of it, except a hometown, Bon Jovi and Monster Magnet have little in common. Except there are more parallels than you might think. For one, Jovi did this “different versions of classic songs” thing with “This Left Feels Right” (it was rubbish of the highest order) but students of late 1980s rock might remember the “longform video” the best of these – essentially warts and all films following bands on tour, was “Access All Areas” which followed JBJ and the lads on the New Jersey trek. On it the man himself was asked how you could stay grounded. “Easy,” he said. “For most people what we do is just something for them to get from point A to point B in their car.” In that context, therefore, all music is pointless. So to call this “Redux” version of “Mastermind” pointless is, well, pointless.

And actually it’d be to miss the, urmmmm, point as well. Monster Magnet have done this before. Last year they brought out “Milking The Stars,” a barmy collection based on the record they’d released the preview year. At that time this reviewer interviewed Magnet’s main monster, Dave Wyndorf and he said that such a thing was going to happen again because doing it was exciting to him. He also said that the one he was working on at the time was the strangest thing he’d ever done.

Even allowing for the fact that this is a bold claim given how strange some of their early material was, he’s not wrong.

Essentially, this is the same deal as last year’s effort. “Cobras And Fire” is entirely different versions of the songs that made up the brilliant “Mastermind” record. This time, though, they’ve really let their imaginations go. It’s epic, it’s sprawling, it rocks, it rolls, it thuds and it does exactly what Wyndorf wants it to and hang the consequences. It begins with “She Digs That Hole” which means the opening line of the record is: “her name is Cobra and she’s my porno wife” and frankly ladies and gents, how do you dislike a band that starts a record like that?

It’s pointless comparing versions, so different are they. When it works it’s stunning. “Watch Me Fade” is now a 1960s psych swirl with organs, the previous album’s title track is transformed into a doomy masterpiece, while the nine and a bit minutes of “Hallucination Bomb” – from where the title of this new record comes – is quite simply one of the best songs of the year.

And so it goes on. “Gods And Punks” arguably the previous album’s standout moment is now restrained where once only bombast would do.

Most of the other interest surrounds two songs at the end. “Ball Of Confusion” by the Temptations, was always odd, but it never sounded like the Doors at their most menacing. It does now, while the mash up at the end which includes versions of “I Live Behind The Clouds” and Paradise” from “Last Patrol” is subtitled “Evil Joe Baressi’s Magnet Mash Vol 1” in honour of the producer. It’s completely off the wall and it’s right up there with the best things on the record.

So, pointless? No chance. Self-indulgent? Most definitely. Brilliant? Most certainly. Considerably better than the last time they tried this actually. Now they are in their stride, just Imagine what they’ll do when they re-record “Spine Of God”! Over to you Dave…..