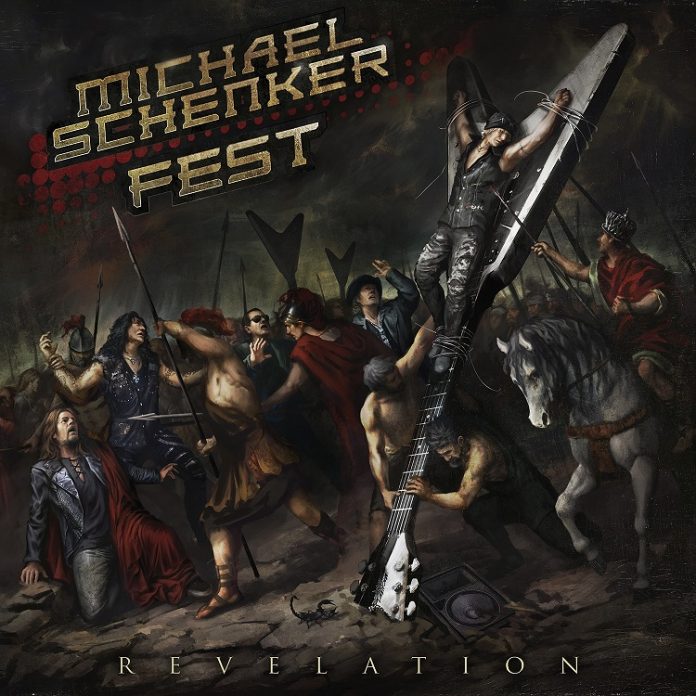 There are driven people in this world. The sort of person for whom the words: “that’ll do” are not part of the lexicon. People for whom everything they do matters.

I am not one of them.

Everything, you suspect, about “Revelation” was planned to the last, tiny degree. The cover, even, which depicts Schenker himself on the cross of his guitar while band mates that he’s played with are all around.  He even reckons that the album could have been called “Purity and Passion versus Greed and Corruption”.

Then there’s this bit, I couldn’t get past this passage without feeling his passion come off the page: “My music and especially my lead guitar playing has always been based on how I feel and see it” he reckons in an interview with his record company. “That’s what I’ve done with UFO, with the Scorpions, with MSG, with everything I’ve done. There has to be meaning with deep emotion behind every note. That’s the beauty of pure music, and that’s what my albums mean to me as well as “Revelation“ – it all comes from the need of pure self-expression.”

That, actually, sort of frames the context of the album. The way you listen to it. The very first lines of “Rock Steady” immediately make it autobiographical too. “It all began long ago, you have to understand, the boy became a rock star with a guitar in his hand……” sings Graham Bonnet (I think – all four of the main singers in MSF are on this one) but it doesn’t matter, really who does what here, everything is conducted through Schenker himself.

He’s a fabulous guitarist, one of the best, and as such he so adaptable and there are so many styles on this. But then as the lyrics on “Under A Blood Red Sky” ask, “when was the last time you did something for the first time?” and that sort of informs the entire debate here.

This was a project that started on the stage and developed. As such, the bluesy, almost boogie woogie style of “Silent Again” absolutely crackles with electricity. There is a hard rock swagger about “Sleeping With The Light On” that marks that one out as special too.

Partly because of the absolute class of the musicians involved here, I suppose, but most of the places you look there is something of top quality. The synth work from Steve Mann is superb. There is a flavour of Europe at their best in “Behind The Smile”.

A couple of times it veers just into filler, in truth one of them is “Crazy Daze”, the other is “We Are The Voice” – the one with a guest on, as Ronny Romero, from Richie Blackmore’s Band – in between there’s one that’s much more like it, “Lead You Astray” with its touches of Montrose is a real fizzing, crackling special piece of music. “Headed For The Sun” – which again benefits massively from some mighty drumming from Bodo Schopf – likes the idea so much it does it again.

The AC/DC ish tones of “Old Man” are sure to sound great when they play them live (and I’ll be staggered if this one isn’t in the live set) while “Still In The Fight” is the work of a man who is still bang up for the scrap and if I deliberately haven’t mentioned the solos too much elsewhere in this review that is basically because of the title track.

Instrumental, and basically MS going “yeah I can do this, and do it better than anyone else does” and that, really is that. He’s a genius. And he has given everything to this.