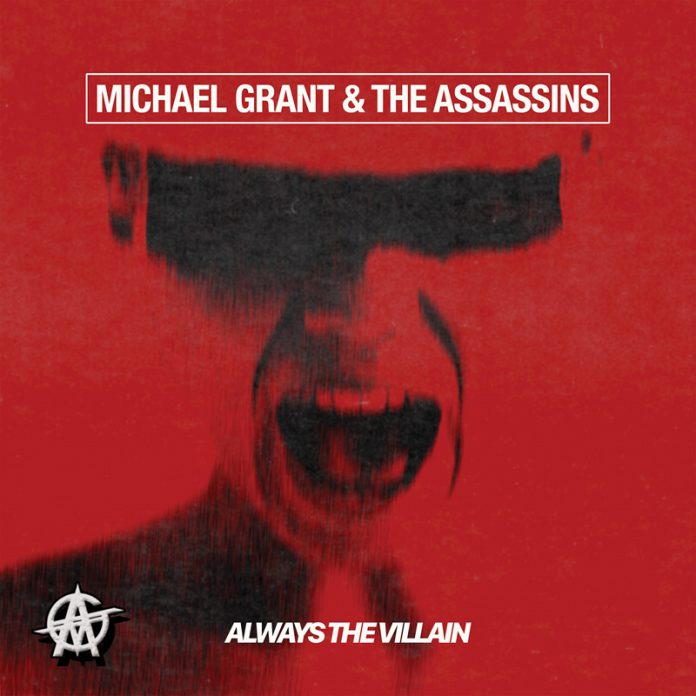 I heard an interview with Michael Grant a couple of months ago. We’d been in lockdown about six weeks or so and he was asked his opinion on the streaming of gigs. “I am sick of it, bro!” was his response and it chimed with mine.  I haven’t been enthused about them, it seems so sterile.

And for the exact opposite reasons “Always The Villain” is so good, because it pulses with an energy, because it is pushing the boundaries and because it feels like it happened organically.

All those things are made all the more remarkable, given that Michael Grant And The Assassins are shooting that gun alone. That is to say Grant plays all the instruments here, and goodness me he’s good.

Many might know him as the touring guitarist in LA Guns (he was good there too!) and the opener “Barrel Of A Gun” cleverly suckers you in to a sleazy world, but this was also the driving force behind Endeverafter too – and “…..Villain” owes as much to their more modern rock sound as it does to the sex action of the Sunset Strip.

The result is a stuff like the title track, which is crunchy, hook laden stuff, but it is work that belongs to 2020 and sounds like it too. Then there’s the solos, my, my this boy can play. The guitar work here is from the top draw, there is a bit of  Slash about the lead breaks (and come to think of it, a bit of  the boy Hudson in the album as a whole too).

But then more brooding sounds, such as “Killing Me Slowly”  – which has a metal tinge – is beholden to no one at all, and even the more overt radio rockers, like “Nightmares” are from the more interesting end of the spectrum. The new breed of arena rockers don’t sound as urgent as this, that’s for sure.

The first single, “Red Light Run”, which had emerged around the time of the aforementioned interview, chugs along like the very best pop rock. A kind of rebooted, 21st century Bon Jovi, if you will, but this is followed by “Anthem Of Us”, and oddly this tells you most of what you need to know about Grant. A ballad, in a manner of speaking, it is a world away from “The Ballad Of Jayne” as if to underline this is a brave new world.

The thunderous drums of “Break Me With You” evoke some 80s Def Leppard stuff, but the almost industrial sheen of the track itself is a totally different thing than you imagined, but the harmonies are always sweetly accessible.

“Death Of Me” swings some big balls over a big old riff, and a real intent, but “Runaway (Can You Stand The Rain)”is perhaps the highlight. The sound Alter Bridge think they’ve got, its all here, and with a fair wind, and the chance to play in front of people, this would resonate big.

It really is staggering how many different sounds Grant gets on this, “Gimme Salvation” is hard rock as done by Stone Sour and the likes, while “Secrets”, well, the way it kicks off, has an 80s Whitesnake feel about it, although the vocals and the sound is way less dated than that.

“Always The Victim” is a real gem. An unexpected one, maybe, but then, they are always the best kind. Apparently Michael Grant is focussing on The Assassins now, and as such, it’ll be interesting to see how far it goes, because whilst there’s a lot going on here, not much here misses the target.