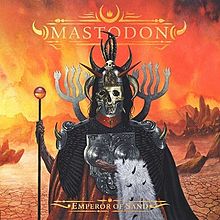 Studio album number seven brings out the progressive best in Atlanta’s metal giants as they find triumph through adversity.

Mastodon could never be accused of taking the easy way out. Throughout their career they have defined and then re-defined what they are and what they are capable of.  On Emperor of Sand, their seventh studio release, they have shifted the goalposts and raised the bar to create their most accomplished work since 2009’s Crack The Skye.

Illness and death amongst the band’s family have provided a difficult and challenging backdrop to the writing and recording process of the album and there are moments on Emperor of Sand where it is clear that the tough times are reflected in their music.

“Sultan’s Curse” opens the album with a riff that charges and thunders across the plains whilst revealing a typical thoughtful and creative burst of energy that flows through the album as it regales the tale of a Sultan who gives a death sentence to a man and as the man attempts to escape his fate the sun steals all his energy. Using telepathic means he tries to communicate with various African & Native tribes to kill the sun with rain.  Of course, everything has a metaphorical vision but the stories are very real and as personal as it gets.

“Show Yourself” continues the pace and displays the band’s often over-looked melodic ear to great effect. Their finely de-tuned ear for ferocious melody remains intact throughout the whole album.  An album that was produced by uber-producer Brendan O’Brien, who knows a thing or two about what makes a great melodic rock/metal album having previously worked with the band on the aforementioned Crack The Skye and of course, with bands like Pearl Jam & Stone Temple Pilots.

The multi-layered vocal triumvirate of Hinds, Dailor and Sanders is a real joy on this album and adds value to every track. Effortlessly they switch to their own unique voice but still speak as one.  The band invited regular guest contributor  Scott Kelly (Neurosis) and also Kevin Sharp (Brutal Truth) to join them as guest vocalists on “Scorpion Breath” and “Andromeda” respectively and that’s add another touch of class to the album.

Tracks like “Clandestiny” and “Ancient Kingdom” offer real hope and triumph amongst the desolation. Whilst the final track “Jaguar God” offers a tailspin of bluesy balladry and a dynamic ethereal waltz.

There is no-one else doing what Mastodon are doing, to the level that they are doing it. Their sound is unique and they are taking the unlimited progressive boundaries as far as they wish without losing their identity or focus. In a career that has seen many twists and turns Emperor of Sand marks another chapter in the band that will be read as significant a highpoint as Crack The Skye, and praise rarely comes higher than that.

As with all great albums there is not a second wasted and the album is far more than the 11 tracks on offer. The album holds together as one cohesive piece of work.  You can take the tracks individually if you wish and there would be much to enjoy from doing so, a bit like just watching your favourite scenes in a movie.  That said, you cannot beat watching the whole damn thing and waiting for those moments to come.  And they do come.