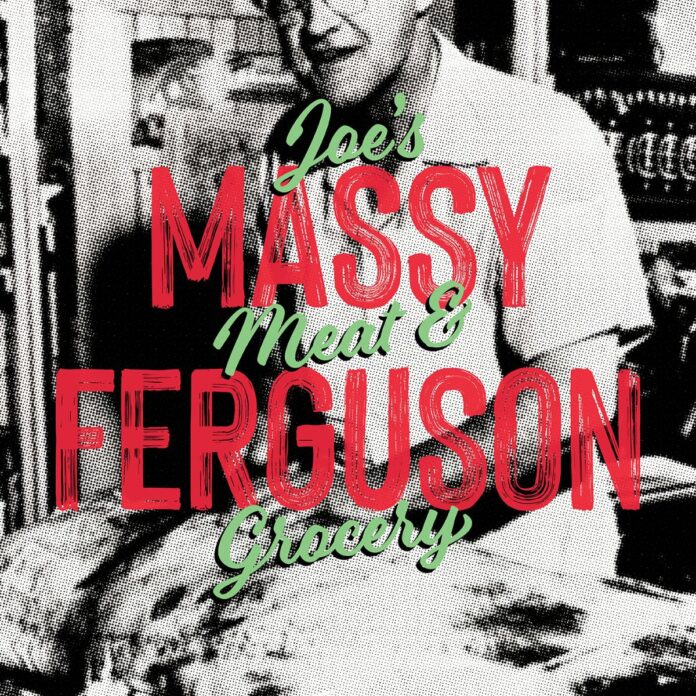 There are certain bands that, whichever way you look at it, are uniquely American. Their sound, yes, but their experiences, the things that led them to this point, wouldn’t be right if they were from any other country.

It was something I saw British singer/songwriter Mike West say the other week in reverse, that he wanted to write a “road song” but couldn’t do the Americana thing of wide open highways, because he was from a land of motorways and he valued authenticity.

And authenticity is all over this, so Massy Ferguson are still an American Band (if you’ll pardon the paraphrasing of Grand Funk).

“Joe’s Meat And Grocery” is named after a store that guitarist Adam Monda’s Great Grandfather, used to run in at the turn of the 20th century and the music is similarly steeped in the grand American Tradition.

Essentially, you can’t listen to “Miles Away” without hearing the greats. There’s a bit of Springsteen here, a touch of Petty there, and if their previous work has straddled the two lanes between Americana and rock, then this one, in truth is mostly the latter.

A songwriting partnership between Monda and bassist/singer Ethan Anderson, MF are an enthralling proposition. Anderson grew up in a strict religious family (the type where they spoke in tongues it seems) and if he found his true calling in music instead of faith, then he learned well from his heroes.

He has a gift for storytelling on the bleak “Save What Couldn’t Be Saved” – the sort of song that simply music be from reality– it could easily fit on “Darkness…..” era Springsteen.

Indeed, it almost seems that this is a journey across the heartland, a bit like those The Boss takes, but the characters are different. There’s a touch of the honky tonk on “Fire Of Life” wherein the narrator (and that’s how I see these songs) reasons “that I gotta stop thinking you were right” as if steeling himself for the next chapter.

The unanswerable questions are here throughout, but they are literally the point of “I Don’t Know Why”. “I don’t know why I keep making things so hard” sings Anderson, but he could be singing for us all.

There’s a real melting pot of sounds here, too. Jangly, but with almost punk leads, but the drums of Dave Goedde thunder and few modern bands outside the Hold Steady use keys as well as Fred Slater.

When they get the big arena rock sounds going, like on the brilliant “Backspin” there’s not many who are their peer, either. That one’s even set in the UK too, although “Off To See Rose” is as southern tinged as anything Skynyrd did. A little bit of sunshine in the Northwest drizzle (unless Frasier lied to me).

This is a quite fabulous record, one that is entirely comfortable too. The harmonica touches of “Sister Roll Up” add something, while the near Jason And The Scorchers vibe of “Leave If You Want To” are perhaps the most country, and “Off My Mind” has harmonies that the likes of I See Hawks In LA would love to call their own.

This is one of the rare records where you wouldn’t want to skip a track, even as we get to the end, it hurtles rather than limps. “The Road Ahead” which passes as a ballad here, is stoic: “I’ll take the fall out” says Anderson, as if he’s prepared for anything (and there’s even some Stones circa “Sympathy For The Devil” style backing vocals) and what follows is “A Hard Six”, maybe the best thing here, certainly the one that lets its hair down the most. The opening line “I think that I think too much” perhaps accounts for that, but it’s the one that gets dirty the quickest.

“You Don’t Know Me” adds a Faces type thing as it ends things, but that’s entirely in keeping despite very definitely belonging to the soil over The Atlantic, as what it proves is that rock n roll belongs to us all. Massy Ferguson on one hand, plough a furrow (sorry, I had to…!) that is all their own, but their sound is such a classic sounding one that it is impossible not to feel like you are listening to a well-thumbed copy of something you’ve always loved.