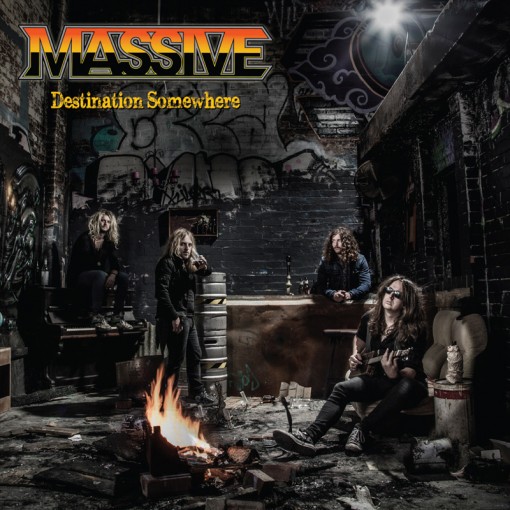 The dog ain’t beaten just yet

Its an undeniable fact that you can still tell a lot by a band name. For example, MV saw a band called Slabdragger last year. Acoustic pop it was not. Then there’s anything with the word “Hollywood” or superfluous X’s in – those one’s, it’s a fair bet, are going to think its still 1987 and don their latex.

The reason for these thoughts are connected to the second album from Massive. That name, just like the others, betrays exactly where their heads at. It’s simple, no frills, and just says, “yeah, we want to be, well massive.”

With that in mind,  a couple of its 10 songs that sound like a manifesto. The mighty, meaty groove of the title track, really is all you need: “Pack your bags, as we gotta get moving on,” so sings Ben Marr. “To a city that never sleeps, in a world that’s in your dreams……” then crucially it adds: “The destination is wherever life will take us.”

This feeling of outright defiance is finished beautifully by the last track on the album, “Beaten Dog”. A stripped back, countrified little strum, it grits its teeth and suggests “even a beaten dog gonna have its day……”

Three years after their debut “Full Throttle” its s though Massive have realised the party has to end sometime and the hard work has got to start, and with the quite superb “Destination Somewhere” the Aussies are making their bid for stardom.

Coming atacha with all kinds of intent with “One For The Road” the widescreen chorus is one of a band that have paid their dues and want to reap the rewards if you don’t mind. They’ve got the songs to do it this time too.

“Sinking Ship” is a glorious mixture of blues filth and sassy swagger, “The Fall” soars like something that Crobot would try and the mid paced “Made Of Stone” would sell by the bucketload if anyone still bought singles.

And in fairness, the great songs just keep coming. “Up In Smoke” is looking for trouble and isn’t stopping until it’s found it, “Circus” does a nice a line in rock n roll vitriol as well as giving Marr a chance to show his versatility, sounding oddly like Mike Patton from Faith No More at points, while “The Way It’s Always Been” will happily drink with you all night then leave you with the bill.

Right now, there’s an Aussie rock n roll band making the news. Massive are here on “Destination Somewhere” giving you every reason to forget that particular soap opera. If this Axl/DC experiment only has a handful of shows to run, then after the summer there’s going to be a vacancy as the kings of not just Australian rock n roll, but the rest of the world too. These boys from Melbourne can’t see why it shouldn’t be them who are the replacement.