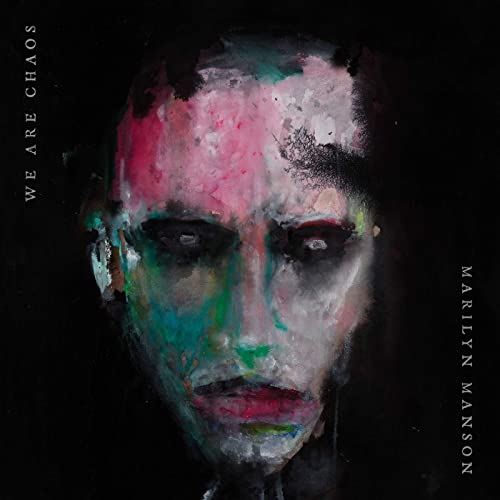 It doesn’t seem like 20 years ago, but it is. One Sunday night I was sat in the NEC in Birmingham (as it then was) watching Marilyn Manson.

I’d resisted the cult of the God Of Fuck up to his Holy Wood record. If there’s a movement I will always generally be the last to get on board (I still proudly haven’t got Instagram or Facebook and have only watched two things on Netflix – a Springsteen gig and that shit Motley Crue film). But there was a time, back then, when Manson was genuinely dangerous and more to the point, really, really good.

It mattered not where the truth lay and the myth started, he was scaring people that needed to be scared and fair play to him for that. Plus he had some brilliant choruses, that helped.

Now, there’s no point in me pulling the wool over anyone’s eyes here. My knowledge of his work post-2003 is a little sketchy, but though his commercial peak might be behind him, MM has stuck an album out every few years.

The problem that befalls his 11th “We Are Chaos”, is to be honest, we are. What can he say that will shock a world where Covid exists, people have to take to the streets to explain that their lives matter, idiots vote for Trump over there and over here proudly use the hashtag #BeMoreKind while voting for an ideology that thinks you only deserve kindness if you can pay for it.

The answer is nothing. And the cleverness of the 11 songs on “…Chaos” is that doesn’t even try.

Instead, he has turned up with a record with more real emotion, and more tenderness than you’d ever imagine.

A Marilyn Manson album usually wanders around in the shadows, and prepares its attack. “Red, Black And Blue” delivers its state of the union to start with. “My eyes are mirrors and all I can see,” he says (literally, he speaks the words) “are Gods on the left and demons on the right.”

From here, there’s a kind of electro pulse, an industrial flourish, and an explosion into a maelstrom of confusion as a hook. So far, so Manson. But then, well then, some strange things happen. The title track is the kind of acoustic weirdness that belongs in Flaming Lips songs in the 90s, and there’s the same effortless sloganeering that always came easy. “We are sick, fucked up and complicated” might be simple, but every single disaffected youth in middle America has an anthem to rally around.

And as if to further roll back the years, there’s a real 90s goth thing going on in “Don’t Chase The Dead”. The Sisters of Mercy with a bit of icing on the top. But then, surely, it was ever thus. No one ever said Brian Warner was reinventing the wheel, he was just really good at repackaging what you already knew.

There’s some real curios amongst these too. “Paint You With My Love” would be lovely if it wasn’t for the title and the obvious connotations, and “Half Way And One Step Forward” is built around a metronomic piano.

It is only about now you realise how little guitar is on this. A key point to the overall feel of the record, and credit surely must go to the producer of “….Chaos” for the new direction. Shooter Jennings is a brilliant songwriter in his own right, but he helmed last years Duff McKagan record and does an incredible job here too.

Whatever the reason, Manson hasn’t sounded as dialled in as he does on “Infinite Darkness” for years (and Jennings’ bass player, MV favourite Ted Russell Kamp adds a real menace here).

The last few, actually, move things into a higher gear. “Perfume” is a trademark glam stomper (think his “Mechanical Animals” era) while “Keep My Head Together” is perhaps the best thing this brave new world offers. A rawness, a violence, but enough goth grandiosity for anyone. “Fuck the past” he whispers, as if he’s daring you to make him, while “Solve Coagula” would be absolute pure pop music were it not for the lyrics: “I am not special, I am just broken, and I don’t want to be fixed” – whatever else you can say, you can’t say this isn’t memorable.

What is, largely a brave new world for Manson, ends with an acoustic turn. “Broken Needle” could have just about got itself on a latter period Oasis record – but all the while with a cinematic tinge that suggests the credits rolling as the hero walks away from the wreckage.

On this one, though, Marilyn Manson is ready to show his scars more than ever before. And  the result – for the first time in a long time – has just as much substance as it does style.