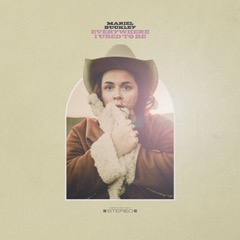 Mariel has shared that “I wrote this album for losers and underdogs. I want every outsider and lost soul to feel seen and safe with these songs. I wrote it for kids who do/did feel underrepresented in the mainstream media, in church, at school or at home. I wrote it for anyone who’s ready to make a change, and especially for those who aren’t.”

`Neon Blue` begins remotely and grows with intricate guitar chords and steel guitar accompanying a constant drum beat. The lyrics are wonderfully descriptive and you almost feel like you are there with cigarettes put out in cups and having to urinate in the car park as the toilet is literally a busted flush. The song may possibly be a metaphor of good times gone by and longed for. There`s a superb guitar solo towards the end. A drum machine beat and breathy vocals lead us into `Whatever Helps You`. A  late night reflection or musing on a one sided relationship and recognising that you either accept the situation or move on. A kind of resonating guitar and meandering pedal steel add a real poignancy to this number.

`Going Nowhere` opens with a cracking line of “ I get bored, I talk shit, i`m getting tired of doing it” which succinctly sums up the frustrations of life. The track progresses with further observations that highlight the disappointments and mundanity of day to day existence and the difficulties in trying to alter these. The exasperation is almost tangible in the vocal delivery. In `Driving Around` we have a quite introspective daydream on how the narrator maybe still wishes that they`d seized the day in their youth and how things may have or still may turn out.  I found the number musically fairly mesmeric and felt myself drifting away with my own echoes of the past.

There`s a stark beauty about `Hate This Town` which portrays a broken romance in a broken town where everyone knows your business and you just want to get high to enjoy some brief respite from the situation. A sad reflection but shared with such honesty. We have a further reflection on a bruised relationship with `Love Ain`t Enough` where the narrator`s ex seems to haunt their very existence. The organ refrains and steel guitar tinges bring a further sense of melancholy to this composition.

`Everywhere I Used To Be` is a rockier outing which has that sense of moving on, both physically and from a doomed romance. The drumming, pedal steel guitars, keys and vocals give it a real expansive sensibility. There`s a kind of road trip feel to `Shooting At The Moon` which rolls along and you can almost picture the fields as you pass them by. It seems to touch on ambition and that willingness to strive for what you want.

The oddly named `Horse Named Nothing` is a laid back thoughtful number that seems to ruminate on the mistakes made during a long over affair and the potential consequences that may occur due to the raconteur`s poor behaviour. The album closes out with `Let You Down` which reflects on what looks like the dying embers of a romance and how the writer will cope alone. Although the subject manner encompasses heartbreak, it`s musically quite upbeat with some resonating guitar chord riffs, a steady drumbeat and dreamy pedal steel tinges.

There was much to enjoy on `Everywhere I Use To Be` which has plenty of songs about failed romances but also highlights life observation and challenges that are so simple but so effectively shared hat they are almost poetic. Mariel has a delightfully warm and alluring vocal delivery and I found myself drawn into these soulful tales of life and love.