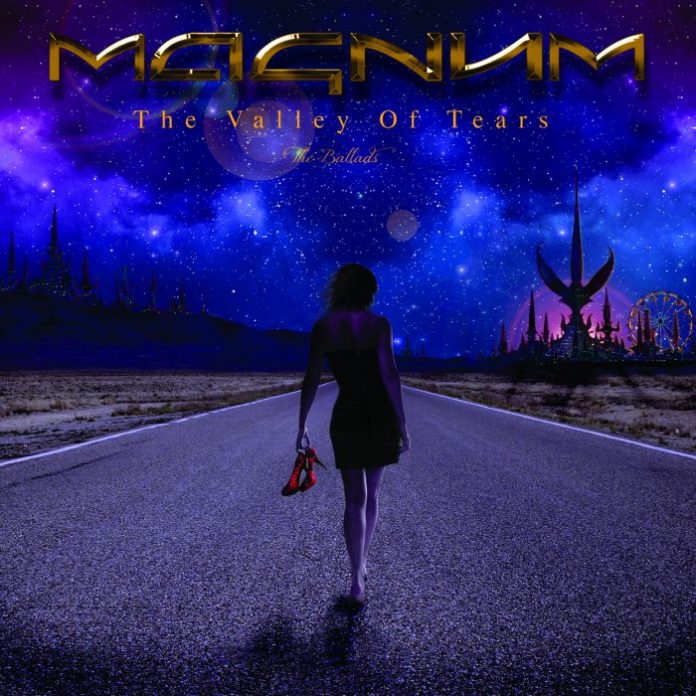 Hankies at the ready, it’s the tearjerker of compilations

One of the most gratifying things about the rock scene in Britain in the last decade or so has been the real renaissance of Magnum. The Brummie melodic/power metal band (call them what you like it all fits) have released a string of great records over the last few years.

Just this year they stuck out the phenomenal “Sacred Blood ‘Divine’ Lies album to rather cement their reputation as one of the best – and most enduring – of outfits.

“Your Dreams Won’t Die” one of the tracks from “…. Lies” appears on this too. “Valley Of Tears – The Ballads” (it’s title comes from a song on the 2014 “Escape From The Shadow Garden” album), and that in itself is interesting, as in common with a few on here, it’s remastered (and to be fair you can tell as it does sound perfect in this form.

As the album title suggests, though, this is a collection of Magnum’s ballads. No one writes them quite like Tony Clarkin either, and there’s no one who delivers these lines like the legend that is Bob Catley, which makes this kinda cool.

The gorgeous cover art indicates that there’s plenty of thought gone into this too, and it’s not the rag bag collection it would have been in some hands. Magnum simply have too much class for that, and anyway, the idea for the album came from Clarkin’s daughter, so it is just a bit personal too.

Amongst its ten tracks are new versions of three – “Broken Wheel” from the 1992 album “Sleepwalking” is perhaps the best of these – but as you’d except from a band like this, then they are not hugely different from the originals, more subtle changes, and “Back In Your Arms” from the “Rock Art” album at the start of the 21st century has been spruced up, given a makeover and sounds less dated than it did.

The others are mostly remixed and remastered – and therefore if we are honest for completestists only  – save for its closing song, a brand spanking new live version of “When The World Comes Down” – originally from the 86 classic “Vigilante” album, which is quite superb.

Ultimately, is “Valley Of Tears – The Ballads” going to change your life? No. Is it going to fill the gap until the next Magnum album? Perhaps. Does it showcase some of the brilliant songs of one the best bands this country has got? Absolutely.

Magnum’s labour of love – in all meanings of the phrase – therefore deserves your attention.