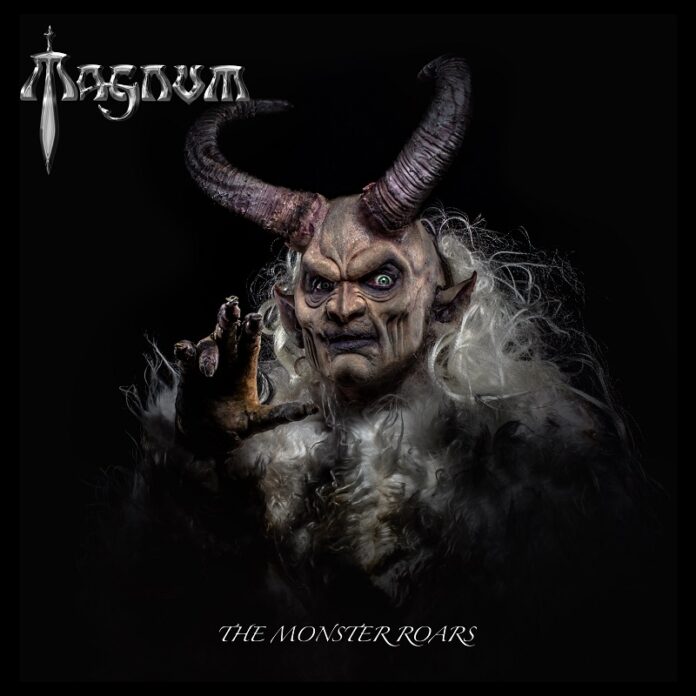 There’s surely not a band as consistent as Magnum.

You can basically guarantee that every January they’ll release something. A live album here, a compilation there, and every couple of years a studio record will follow.

So before we go any further, let’s have some praise on this site for the most under the radar genius (and that’s the right word) in rock. Tony Clarkin. Who has written nearly all their songs in that half a century.

I’ve been a fan of Magnum since 1990. I didn’t know then that the “Goodnight LA” album which got me into the band was not one they looked back on with any fondness, but they were already 18 years into their career then.

And they are still going strong. And on the evidence of “The Monster Roars” still able to chuck in the odd surprise.

The album cover is one clue. Usually they are bright and colourful. This time its like a nightmarish vision from middle earth. But I’d not seen the cover before Christmas when the second single came to me. I played it on my laptop while I was doing something else. When the horn lick came through the speaker I honestly thought it was a YouTube advert. Only when Bob Catley began singing as only he can, did it become obvious that what we were dealing with was a band who was evidently pushing the boundaries.

What is so, so good about the album is that if you loved them before, you’ll love them still and yet they still keep moving forward. The title track is the signature, sort of prog epic they do. This is a band at the peak of their powers.

Clarkin has plenty to pen, too. The modern age is, after all, no fun. But he and the rest of the band somehow manage to keep things from becoming overbearing. And it is a band. This line up of seems like its found a chemistry. Rick Benton’s keyboards are sensational throughout, but never better than “Remember”, which is about stoically hanging on through music (autobiographical? I am saying nothing) and there’s a genuine heaviness in the guitar.

“All You Believe In” likes the idea so much it essentially does it again, and whatever they are doing on the odd sounding “I Won’t Let You Down”, with its late 1960s strings and explosion of chorus, its not like they usually are.

In fact, the difference in tones throughout this is most striking. Not so much a concept record, it is nonetheless a journey. “Present Not The Past” initially teases the idea it’ll be a ballad, before offering in its strident chorus “wisdom is king” and they’ve damn sure got that.

The brilliant songs just keep coming at you – and like all Magnum albums this is one that gets better the more you listen to it. “That Freedom Word” is one of the highlights, because if nothing else Clarkin proves that he has a unique way of playing his six string. The best though (this time listening to it at least) is the longest one. The thunderous and angry “Your Blood Is Violence”. The rhythm section is to the fore here. Lee Morris on drums and the veteran Dennis Ward (producer and ex Pink Cream 69 amongst others). Clarkin reckons he’s lifted everyone’s game and I am not arguing.

There’s a sense that “Walk The Silent Hours” is floating somewhere off into the ether, and I really hope that “The Day After The Night Before” with its energetic, fists in the air feel, makes it into the set when they eventually get on stages again.

“Come Holy Men” is rather more angry than they usually are, there’s a bubbling under the surface, that’s for sure and the acoustic driven “Can’t Buy Yourself A Heaven” seems like it might be it’s other side of the same coin, and the closing solo is one of rare skill. The rich seem to be the target of the ire “do you know what you stand for?” Asks one of its lyrics. The irony of course, is that the band singing it have always known what they want to be. And on “The Monster Roars” they’ve continued to push forward in a most incredible way.

Celebrating their 50th year with a record that is as good as this? There’s no hyperbole in this sentence: Magnum are purely and simply the best at what they do on the planet. When it comes to melodic rock epics they have no peer.