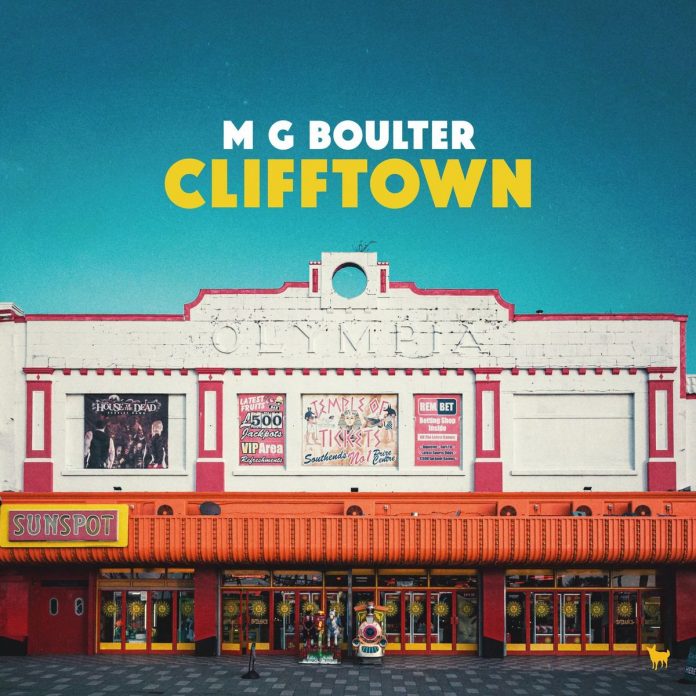 M G Boulter is a singer songwriter and multi-instrumentalist whose talents have been employed in a number of renowned folk and Americana outfits. He has previously released two albums and numerous EPs. His latest release `Clifftown` is a portrait of his hometown Southend-on-Sea from a variety of life experiences and characters whom he has encountered over his lifetime.

The album comes alive with `Midnight Movies` with intricate guitar chords and a rolling drum beat as the singer reminisces about his hometown. He`s accompanied by a female vocalist whose lighter touch so complements his deeper vocal range. There`s almost a longing in the vocals on this recollection of youth long gone. There were some delightfully picked banjo, viola, steel guitar and what sounded like an organ as the track ends. There`s a much faster paced offering with `Soft White Belly` which moves along with guitar, drums and some steel guitar tinges as the singer paints a picture of everyday occurrences he encounters as his day enfolds. Title track `Clifftown` is the fictitious name given for every town where it`s residents have to leave to gain meaningful employment. A wonderfully melancholic introspective number made more so by it`s stripped nature of acoustic guitar, violin swathes and piano or synth keys. The additional harmonic vocal adds to the overall perception of the inevitability of small town life. We have a further reflective number with `Nights At The Aquarium` about losing your troubles in the quiet subterranean world of water. It takes the form of a young girl whose life isn`t all it could be with an unsatisfactory career and a romantic partner who maybe isn`t the best choice so she consoles herself in oceanic dreamlike aspirations that will never be fulfilled.

`The Author Of All Things, She Speaks` is a bit of a strange one which musically I felt brought me in mind of Paul Simon`s `Boy In The Bubble`. It`s a wonderfully intricately presented folky pop song which seems to be a search for something beyond this time and place. Another contemplative piece comes with `Icy Paw` which evokes a slice of wintertime and it`s coldness.

`The Slow Decline` is a mid-paced look back on times gone by with also an eye to the now. We enjoy piano, steel guitar, a shaken tambourine and mellow backing harmonies with a synth or organ like texture during this Americana tinged submission. We have for obvious reasons a more rock genre feel to `Fan Of The Band` a tribute to the people and venues associated with playing and watching live acts. Again, this track brought to mind a sound I’d associate with Paul Simon.

`Simon Of Sudbury` recalls the singers journey to view the relic of the once Bishop of London and Archbishop of Canterbury who was murdered during the Peasants` Revolt in 1381 and whose head is kept at the church of St Gregory at Sudbury in Suffolk. A quite ethereal piece that seems very appropriate given the nature of the singer`s undertaking. The good, the bad and whatever else is brought to life with `Night Worker` which is a snapshot of the carnage at times travelling on the last train out of London and those who sail on her. Wonderfully evocative. `Remnants` is another ruminative number that i`m sure can be interpreted in many ways, a failed romance, or a family member no longer around. The vocal delivery and stripped back accompaniment depicts the scale of this painful loss. The album closes with `Pilate` a quietly shared nigh on stream of conciseness with lyrics that are a little surreal.

There was a fine cast of musicians who participated in the making of this album, but the central core were Pete Flood (drums), Sam Sweeney (fiddle), Lucy Farrell (viola) and Richard Warren (guitar).

There was so much that I enjoyed on `Clifftown` from the poetic lyrical content that really brought vivid images to mind to the musicianship and captivating songs. I`d encourage you to engage M G Boulter as your guide and take a trip to `Clifftown` I assure you it`ll be time well spent.