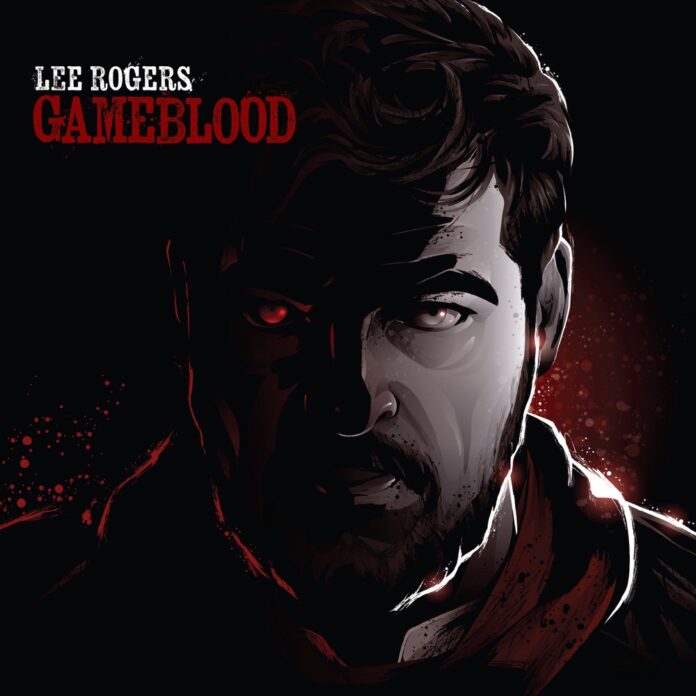 Lee Rogers is a singer-songwriter based in Carrickfergus, just north of Belfast.

He releases his second album `Gameblood` this month which was recorded at Sycamore Studios with his regular band and produced by Gareth Dunlop.

The singer has said about the album “My dad was a second generation settled Gypsy with black hair, swarthy skin, and green eyes, like me. He had gold hoop earrings and old Indian-inked tattoos. He was as hard as the road he walked on but had the softest heart for us and my mother, who he loved unconditionally. He had a fighting spirit, and that’s what I believe ‘Gameblood’ means and is where the album title comes from.”

The album opens with `Everytime` a quite anthemic offering which is about the love the singer has for his wife Nikita. It`s a pretty honest tale of mistakes made and how his partner has supported him. A fairly fast paced rock tinged number with some shades of Americana thrown in. A song that i`m sure his wife will be proud of. We have a quite introspective, reflective track with `Silent Song` that sort of rolls along and becomes fairly mesmerising as it progresses.

`Uneasy Love` was written “about traveling all over Australia with this beautiful woman,” Rogers says. “She set me on lots of the better paths I took in life. She left the planet for her next journey a while back. I had a dream that I was in this old car I had out there, driving in the middle of nowhere and got excited when I looked round and saw her in the passenger seat, sun-bleached hair, tanned skin, bare feet on the dashboard. … Then she started glitching in and out of vision, like she was gonna disappear completely. I woke up, gutted, and went to my studio with tears in my eyes and wrote the song.” There was a wonderful intensity in both the delivery of the song and the inflection in the singer`s voice. I felt I could almost sense the pain felt as he shared this tribute of sorts. A song I must admit I played a fair few times before moving on and left me with a lump in my throat. There`s a synthy quite edgy intro and feel to `The House` a number that is quietly shared, not a ballad but heading there.

`Life And Lies is a ballad that the singer has shared is about “finding love and just a little light in the darkest places.” It`s really larger than life and the vocals really reminded me of that other Ulsterman Van Morrison in his prime. A composition that will ensure, in a live setting, an illuminated arena with phones and cigarette lighters held aloft. We have a really uplifting toe tapper with `Haunted` a narration of a former lover who still has a hold on you emotionally.

`Homeward Bound` is not the Simon & Garfunkel classic but potentially a Lee Rogers classic in the making. A gentle shared musing on life, love and everything, a simple submission but so effective. We have another offering in `Won’t Find Me` that ruminates on life and is a pretty captivating nigh on mesmeric listen. A deep and thoughtful piece that i`m sure wouldn`t be out of place on any of George Ivan`s many releases.

`Fools Gold` has a sort of funky vibe to it and will have you gently swaying along with it as it evolves. We close out with `Barefoot In The Basement` which features fellow Northern Irish folk blues singer-songwriter Foy Vance. It`s another inciteful contemplative reverie that will leave you with a warm glow.

`Gameblood` is an album that will need a few listens before it really hits home and i`m sure you`ll read or gain something different each time you revisit it. Lee Rogers has a really rich and varied vocal range and some of the songs he shared here were of a quite personal level. He has stated that he wasn`t in such a good place as he started recording but i`m sure that the process must have been pretty cathartic.

There are a fair few tracks here that will stay with you long after you`ve listened to them.

I can only encourage you to take some time out to listen to this fella and in doing so you will be richly rewarded.