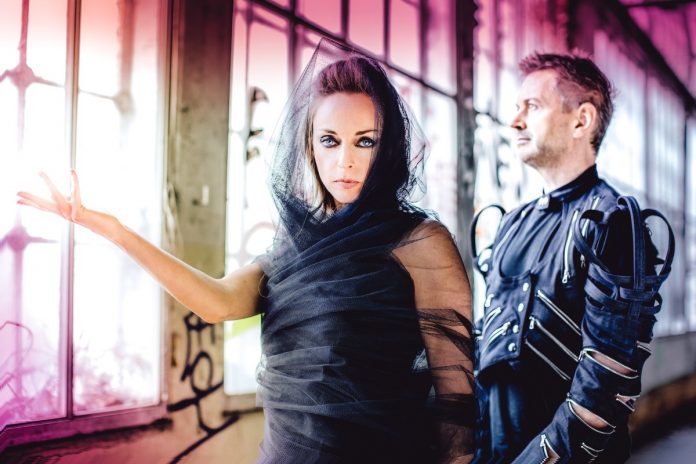 League Of Lights are an electronic pop-rock duo comprised of Farrah and Richard West. They have just released their third album ‘Dreamers Don’t Come Down’ where the majority of the album was written and recorded during the 2020 spring/summer lockdown. According to vocalist Farrah West, “the album is about the past, the present and the future – about taking the best from all that you have been through, the pressures of modern life and keeping your dreams alive in dark times.

The album opens with `Modern Living` which does seem to have a slight retro feel. The thing that does hit you immediately is the impressive vocal delivery from Farrah. The song itself has a subtle mix of synth keys, guitar riffs, a leading bass line and those sultry vocals. An excellent track to lead in on. There`s a more ethereal feel to `Twenty Twenty One` but it does have it`s more forceful phases along the way. A quite dreamy mesmerising composition.

`Ghosts` is a more upbeat number that races along with some driving drums, flowing synth keys, a constant bass line and delicate vocals gushing over the top and throughout. We have a much more reflective piece with `I Still Remember` a quite melancholic quite mesmerising arrangement that will possibly draw some of your own ruminations to the surface.

A search of the net confirmed that `Persephone` was the goddess queen of the underworld, wife of the god Haides (Hades). She was also the goddess of spring growth, who was worshipped alongside her mother Demeter in the Eleusinian Mysteries. This agricultural-based cult promised its initiates passage to a blessed afterlife. The track is a quite fast paced forceful offering with pounding drums, bass and a slightly unnerving synth pulse vibrating throughout. The lyrics contain the repeated line of “looking for the light at the end of the tunnel” which may well be a metaphor for better times ahead. The quite contemplative `Dreamers` brings us back to a much slower rhythm. A ballad like submission which relates a message of hope.

`With You` is a really captivating song that will have you singing along, the lyrics and tune are uncomplicated but so effective. Another dreamy ballad like number is shared with `Lines In The Sand` slower and quite meditative with some alluring synth swathes that seem to envelop you along the way.

`The Collector` is written about things we amass and carry with us on our journey through life and is another wonderfully addictive tune where Farrah`s voice is delightful with just the right balance of detachment, strength, and sweetness. I felt `North Of The Sun` had a real strange hypnotic quality about it. I was really drawn in by the vocals and supporting musical backing and found myself drifting off to reflect on things long gone.

The album closes out with `Echoes Of A Dream` a laid back ruminative, thoughtful piece which ponders a brighter future. The track is a sort of reimagining of previous track `Dreamers`

‘Dreamers Don’t Come Down’ is another release that has come together during and because of the current pandemic situation but as some have been quite bleak and insular, League Of Lights have shared a much brighter more positive hopeful outlook. It as they offer , addresses the past, present, and future. Richard has said that the duo wanted their sound to be “more open than before with less synths and more space for Farrah’s vocals to really lift off”.

The duo certainly have an asset as Farrah`s voice has such a rich and varied range but that has been allowed to flourish with Richard`s musical dexterity. A subtle Yin and yang effect.