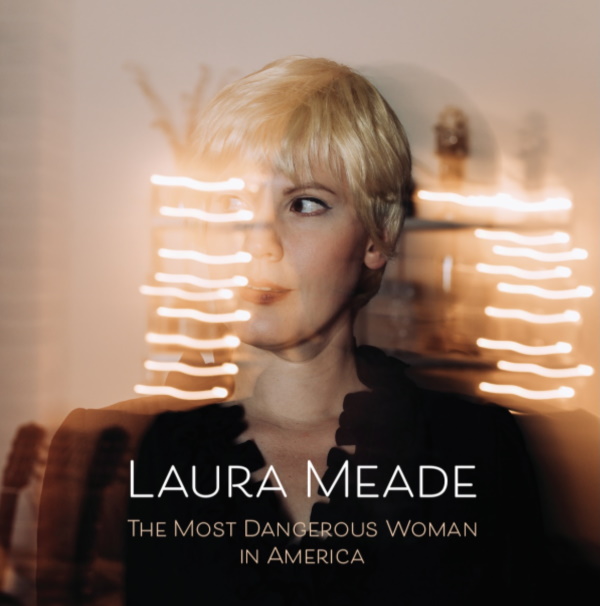 Laura Meade is one of the female lead singers from the New York-based progressive rock band IZZ.  Laura has a new album due this month ` The Most Dangerous Woman in America` which is the follow up to her solo debut Remedium.

The album was co-written with IZZ bandmate and husband John Galgano and explores the story of a woman whose voice was silenced and whose story was all but forgotten by her own country. Meade is joined on the album by IZZ members John Galgano (bass, additional keyboards, electric guitar), Brian Coralian (v-drums, electronic drums, percussion) and Tom Galgano (keyboards). This release is a concept album that tells the tale of an unnamed woman grappling with the challenges of life in the public eye and the oppressive emotional toll it takes.

`On the Shores Of The Seine` is just a brief snippet of waves crashing against a beach and a couple singing some lines in French. There`s a pulsing piano and bass heartbeat through `Leaving` and Laura`s vocal floating and flowing in and out of the number.

`Burned At The Stake` is a more ethereal piece with a repetitive quite hypnotic piano and drum beat at the heart of it. There`s a bass line quietly throbbing in the background as the singer`s questioning vocals search for answers. It becomes a little more antagonistic vocally and musically in the latter part of the song. There`s a more introspective nigh reflective offering with `Iconoclast` which is stripped back with mostly vocals and piano keys.

`End Of The Road In Hollywood` is a bit of a mix match of styles and opens up quite gently before gaining a fairly rapid momentum as it journeys through some dreamy then some jazzier passages with a thumping drum beat that is driving but almost trying to overwhelm the number. Again, `Doesn’t Change A Thing` seemed to ebb and flow as it begins with piano and vocals before drums, bass and keys join in to expand and broaden this track. There`s a real curve ball in the last minute where it becomes quite electronic and ends with vocals atop and an almost harpsicord like piano sound.

Title track `The Most Dangerous Woman In America` is probably the most progressive rock piece on the album and allows Laura`s rich vocals to really shine. We enjoy keyboard solos, rapid synth swathes, wistful bass lines and rapid keyboard tones along this interesting musical journey which concludes with piano and vocal. A drum machine beat, and piano lay the foundations for the vocals on `The Shape Of Shock` which is a curious composition that I wasn`t sure of what to make of.

`Forgive Me` is probably the rock song on the album nevertheless it again is a curious submission which peaks and flows as it progresses and almost comes to a standstill at times. We also have the addition of a string arrangement and a tambourine being shook during this eclectic piece. The album closes out with `Tell Me, Love` a stripped back stark arrangement initially with just vocals and piano before it`s filled out with robust synth keyboards and drum beat just over the halfway mark.

Concept albums can be quite divisive as most people will either love them or hate them and usually associate them with long gone prog rock bands from the early to mid-seventies. So, `The Most Dangerous Woman In America` is quite a brave move for Laura Meade but it comes off pretty well.  She has a wonderfully rich and diverse vocal range and while i`m not convinced by the subject matter on this release, there`s no denying the obvious talent this artist has. As to whether Laura Meade is `The Most Dangerous Woman In America` that’s for you to decide.