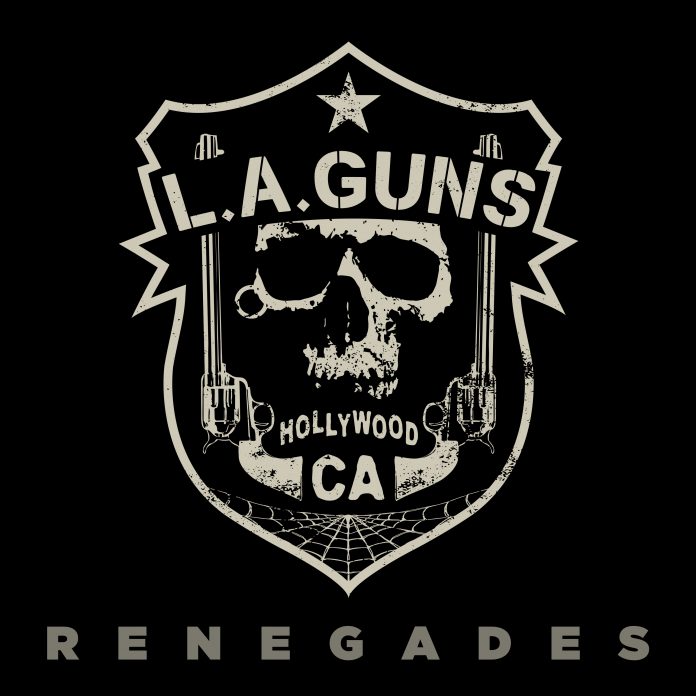 I wasn’t intending to start this review in this way, but it struck me as apt.

Playing the opening track on my computer, Microsoft decided to put some stock images up. The one that showed while “Crawl” kicked in was one from about 1986. All dressed up like they were going to have a night in the Rainbow Bar And Grill. Big hair, bandanas, dark glasses, the full monty.

Yes, ok, I know the history of this band just as much as anyone else does. But that type of “hair metal” (and I hate that phrase at the best of times!) take has always struck me as a little disingenuous.

L.A Guns always seemed to have more about them than nothin’ but a good time, numbers on bathroom walls, and (to use one of their own) sex action. They always seemed a bit of a biker gang to me, the sort that you wouldn’t want to meet down a dark alley, the types to bring a knife to a gunfight.

They still do. There’s a modernity, a crunch, a punk touch to “Crawl” for example and there’s a kind of Velvet Revolver thing going on here.

There are some mighty fine songs on “Renegades”. “Why Ask Why” is perhaps the pick of them. Muscular hard rock in the style of Stone Temple Pilots, it has the effortless cool that they always seem to manage.

“Well Oiled Machine” does the cars and girls, drag racing schtick, “Lost Boys” for me is way better. Mid-paced, full of light and shade and with a chorus that has serious intent, and it does seem that this version of the band, at this stage in their careers cares not a jot for preconceptions. “You Can’t Walk Away” is like something Chip Z’Nuff has made a career out of (The Beatles flavours, for sure have echoes), which they follow up with the thumping riff-heavy “Witchcraft” as if to prove they will do what they want.

For a band that had huge hits with ballads, these days intent is harder edged. “All That You Are” has a fists clenched, and even when they do get the acoustics out on “Would” it doesn’t sound like a rehash of anything, instead it floats by on something of a warm breeze.

The title track is a sort of underlining of my point about the band. The energy, the driving rhythm. There’s a bit of The Cult here, but equally it doesn’t sound like anything else other than LA Guns in 2020.

“Don’t Wanna Know” is kind of the link with the old days. A boogie with a genuine dirt. There is nothing pure here and if there is one that is going to be used in your neighbourhood strip club then its this one.

The great thing about “Renegades” is it proves that L.A Guns have always lived up to the definition of the word: “a person who deserts and betrays an organization, country, or set of principles.” That is to say they always stood apart and they still do.

Or, in a world where their peers – if they release records at all – do so only as an excuse to tour, then L.A Guns, do it because they still have plenty to say.