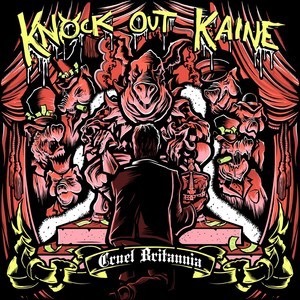 On last year’s full length “Rise Of The Electric Jester”, Lincolnshire’s finest Knock Out Kaine, breathed new life into the UK sleaze rock scene, now they are back with a brand new four track effort.

The “….Jester” record saw them in ebullient party mood. The first single from the album “16 Grammes Of Heart Attack” (which made MV’s songs of the year compilation) saw them swigging merrily from bottles of Jack, for example. This one – as in fairness the title might suggest – is a little bit different.

On the title track, which snarls in a way they haven’t before, everyone gets taken to task. Whether it’s the dirty dealing suits, or the Her Majesty herself as “bones are thrown from the golden throne while the common folk lick the shit” no one escapes (and hats off to them for rhyming “Buckingham Palace” with “fucking phallus” because it’s brilliant).

Elsewhere it’s not quite as vitriol filled, but it’s no less entertaining as chances are taken with abandon. “Love The Way You Hate” wraps itself around an acoustic laid back riff and a clever, catchy chorus that has echoes of Ginger Wildheart’s solo material, “Going Down” does doo-wop in the way Poison used to to blues, and caps are doffed again to their cover of “Copperhead Road.” It’d be pointless doing the song in the way Steve Earle does – perfection after all cannot be improved upon – so what you do is do it in your own and find a rock n roll side to it. Even if somewhere, there’s someone who doesn’t know it, they’ll enjoy it.

“Cruel Britannia” reminds everyone just how good Knock Out Kaine are, but more than that it shows a versatility that hasn’t always been evident.