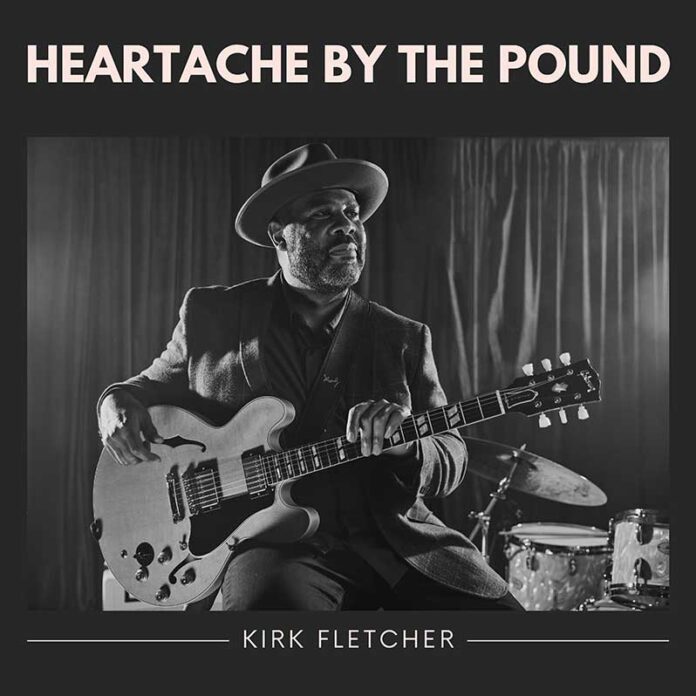 Kirk Fletcher first came to my attention when he appeared with Joe Bonamassa on the “Live At The Greek Theatre” collection in 2016. Then, back in 2020 he released his “My Blues Journey”.

On my review of that one I wrote this: “This is Kirk Fletcher’s journey, through his own music and a life of loving this music. It shines through and is a road that you want to walk with him.” It was the work of a lifer.

“Selling Heartache By The Pound” feels slightly different. For one thing, it was recorded in part at the world famous Fame Studious in Muscle Shoals. And like all music that comes from that place, it seems infused with a kind of timelessness. A feel that it could have come out at any point in rock n roll history and it would fit in.

The soul of the room seems to have slipped in here too. The horn section is as important as the rest of it, it seems. And for all that Fletcher is a brilliant guitar player, with some genuinely incredible solos on show here – not least on the opener “Shine A Light On Love” – that soul of Muscle Shoals is the heart and soul of this too.

“Afraid To Die, Too Scared To Live” – like the opener, written  by Fletcher and Richard Cousins – is the perfect song for your late night reflections, and despite the title (and indeed the lyrics) the title track is as warm as the summer breeze.

He’s partly helped here by the sheer quality of musicians. Reese Wynans’ organ is as tip top as ever, and another Bonamassa Alumni, Jade McRae is as good as soul backing vocals get, but anyone who supports a football team will tell you, that it doesn’t matter how good the players are, its how they blend as a collective. And my goodness, on “I’ve Had Nights By Myself” they are Premier League.

That one is a cover of Albert King. Most of them though, are originals. It doesn’t matter, as it happens, so steeped in the music is this. “Wrapped Up, Tangled Up In The Blues” adds a bit more urgency, a bit more of a contemporary feel, but Dennis Walker’s “Wrong King Of Love” is funky in a way that I thought Otis Redding was when I was growing up and  experimenting with all kinds of things. The drums here lay it down, but what is built on these foundations is special.

Another Dennis Walker composition, “I Can’t Find No Love” makes good on that fact that the bass-man worked with Robert Cray. There’s the same laid back feel, for sure.

“Wildcat Tamer” a traditional blues number from Tarheel Slim, is turned into a raucous slice of fun. Perhaps the one on this record that sees hair let down the furthest, it’s impossible to listen to and not smile.

The record ends with “Hope For Us” – another original – but it tries to find the silver lining in the blues, and in that respect its at odds with some of them. Indeed, the other big ballad on the album almost seems to encapsulate the vibe. “The Night’s Calling For You” originally seems to be doing the standard “my baby left me” thing, before Fletcher concludes “I guess you found out about me and your very best friend….”

What that one does before the solo, though, is key. “I still got this old guitar”,  he says. In a way that suggests that keeping that by his side could cure everything. And listening to “Heartache By The Pound” it is essentially impossible to disagree.