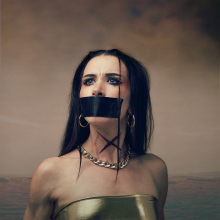 Holly Cosgrove, known as Fable is an English musician and singer born in Paignton, Devon, and is best known for her work with Archive and Paul Hartnoll from Orbital. Fable is now based in Brighton and releases her debut album `Shame` this month.

The album opens with `Fall Away` with initially piano keys and the singer`s expansive vocals before some orchestrated strings add a fairly cinematic texture to the number. The song is a gentle dreamy  introduction to this artist and closes with a piano refrain as it fades. We have in `Womb` a song talks about cycles of emotional states, the repetitive highs and lows that the singer experiences throughout the month. Musically it`s a trippy affair that reminded me of Morcheeba with a quite atmospheric soundscape in the latter section where it really erupts.

`Guilt Of The Act` has a deep bass line and tapped drum skin that lead us along this more breezy pop like offering  with harmonies adding to the vocal approach. A track that flourishes and becomes more challenging but not aggressive. The gentle vocals on `Sandcastle` have at times an echoey feel and with the addition of the accompanying backing harmonies become quite mesmeric.

`Heal Yourself` is fairly stripped back which allows Fable to reveal a rich and quite spellbinding vocal range on this initial ethereal offering which bursts into life in the last couple of minutes and takes on a kind of drum and bass sensibility. The title track `Shame` has a rolling groovy soulful openness while the lyrics I read laments the state of the world and the uphill battle this generation faces,

`Orbiting` has that trip-hop, neo soul vibe of bands like Portishead with an almost vulnerability running throughout the vocals. A composition that had a constant back beat with brushed drum cymbals and shuffled along quite dreamily. The number mourns the outward disconnection and isolation of our modern society. A sound similar to wind chimes introduces us to `The Reaper` with vocals that are deep and enticing and leads us along on a journey that you feel is going to explode but doesn`t. The orchestrated strings and aural soundscapes throughout give it a quite futuristic sense and wouldn`t have been out of place in a sci-fi film such as Bladerunner.

`Thirsty`  is about taking the beauty of life for granted and begins quietly before emerging into a erratic pop-rock questioning belligerent submission which wouldn`t have been out of place in an Alanis Morrissette set back in her heyday. We have a similar sentiment shared on `Unequal` but with an added disco rhythm, where the  lyrical content is shared rapidly and almost robotically.

`Swarm` has a strummed guitar with vocals that evolves with strings and a steady beat joining on this voyage that ebbs and flows as it progresses. The final track `Onion Brain` is more of a jazzy offering with piano, drum and breathy vocals. A gentle number to ease us out with

Fable has a rich and varied vocal range and `Shame` allows her a platform to highlight what she can offer across a variety of tracks that would be classed as trip-hop neo soul. This is a delightful submission for a debut release and it`ll be interesting to follow this artist`s future development.