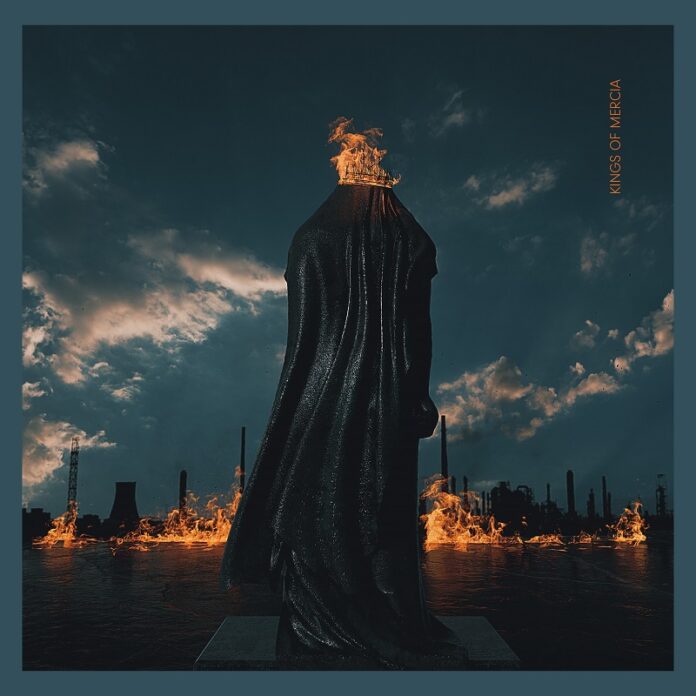 Here’s a sentence that I never thought I’d write. Have you ever thought to yourself, in an idle moment, ‘I wonder what Steve Overland would be like at singing metal songs?’ Ok. I hadn’t either.

Then Kings of Mercia happened.

Steve Overland, it is my absolute unshakeable belief, has the finest voice in music. FM – his day job for almost 40 years, should be in arenas. They are sometimes. But only as the opening act and it upsets me.

Before I get too carried away, we’d best introduce the rest of Kings Of Mercia. Jim Matheos of Fates Warning and loads of other outfits, decided to write some stuff that was out of his comfort zone.  Hre got a list of singers that would suit this brave new world in his head, and long story short, a friend suggested Overland. Enter journalist Dave Ling to provide contact details, and away we go.

Now, these lads know people, so drummer Simon Phillips (sticksman to the stars, The Who, Toto and all kinds) and Joey Vera (I’d list his bands but this is a review not a Wiki Page) are recruited.

All of this sounds like one of those fantasy bands that Frontiers Records like to put together (indeed, Overland has done a couple of those) but it is out on Metal Blade, and more importantly, it is staggering a) how nobody thought to do this before, and b) how good it is.

“Wrecking Ball” has all the hallmarks of the album as a whole. Grown up. Classy (check out the solo!) with a hook that sticks in your head, with Overland singing as only he can and crucially sounding perfect over heavier material.

The phrase “heavier material”, applies to the words here too. Darker lyrics than usual, but my goodness it suits. “Humankind”, the first thing that came together is a prime example of that, but there’s a swagger, a confidence.

Indeed, everywhere you look here, there’s something you can’t resist. “Sweet Revenge” is anchored down by Vera’s wonderful bass, coming in with a real menace. But it soars. Likewise, there’s a kind of in-built grandiosity to “Set The World On Fire” that is almost a knowing glance before it races off on the back of a wonderful Matheos lead.

“Too Far Gone” feels like the album’s centrepiece. Acoustic and slow building, it reflects poetically for over six minutes, and the way it builds is a joy to behold, it really is. Cleverly, they follow this with “Liberate Me” which, after its prog style lead opening, is a straight ahead, heads down rocker.

There’s a few tracks here that could just about fit into an FM show. “Nowhere Man” is perhaps the best example of the “rock” ones, and “Everyday Angels” is like the obligatory power ballad that you knew would be here at some point. It’s cool too. And it’s sweet natured. Celebrating people rather than love.

The last time I reviewed a record with Vera on it was the Motor Sister one from earlier this year, and in fairness to “Is It Right” it could have made it on there no trouble. Fun, muscular, self assured, it is everything that modern hard rock should be.

I began this review by asking what it would be like to hear Steve Overland sing metal. In honesty, that was predicated on the last track. “Your Life” is brilliant. First and foremost that needs to be said, but its opening riff. It can’t be just me that hears Slayer, surely, before it settles down?

And, right there, is the point. Four majestic musicians doing what comes naturally, but pushing the boundaries at the same time. Any football fan will tell you, though, its not about the quality of the players, but how they blend. On that front, Kings Of Mercia are straight from the Premier League, and this is a truly magnificent album.