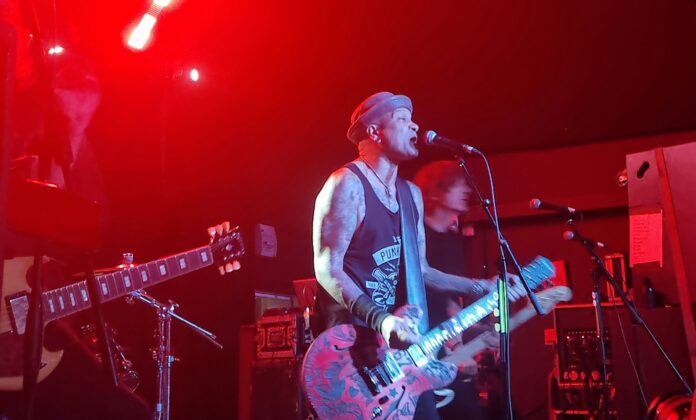 The re-emergence of Grand Theft Audio is the best thing about 2022 – never mind just in music, generally. The fact they are back, and arguably better than ever gladdens the heart of all of us that reckoned they were going to be huge back in the last millennium. For many of the audience, it will be the first time they’ve seen GTA for ages, but they’d have been surprised how heavy, and punk rock they now are. Live, they are fleshed out by Rob Lane (bass man to the stars) and Ben Marsden on guitar, the fabulous “Ruin Your Youth” opens things up. Like many, it comes from their just released “Pass Me The Conch” record, but it does see singer Jay Butler disappear, giving it Forrest Gump around the venue, and he never returns. It does mean that its like watching two bands. The one on the stage, and the one who is rolling around the floor or climbing on audience members shoulders (“I can see all your bald spots from here”). It makes for a show like no other. “Gods Of Rock” is a stunning thing as Butler rattles a tambourine, (“I am like Liam Gallagher”) “Stoopid Ass” is still the dumb king of rock, “As Good As It Gets” is another from that debut, but it’s one from the newest record “Bury The Day” that ends things, and as the three that are on the stage offer the harmony “what a beautiful day to be alive”, it really does sum it up. Joyous, raucous and with some brilliant songs. Grand Theft Audio are back. Don’t leave us again.

Scott Sorry, without being morbid, might not have been here. In 2017 he was diagnosed with a brain tumour. Money was raised, treatment was had, and my goodness its not only great to see him back, but even better to see the gusto with which he attacks this set of his songs. Most of these come from his “When We Were Kings” album, and he brings that uniquely New York sound to things. Punk with a lip-curl “Broken Hearts And 45’s” is a strident opener that attacks you like a gang, but on “End Of Summer” sees him deliver the line “ain’t it good to be alive” with a little more feeling than he might have previously. New song “Saint Of Philli” for his friend Roger Seagal (a former member of his band Sorry and the Sinatra’s) who was tragically stabbed to death is a fitting tribute, and a Sorry And The Sinatras tune “Hated Heart” shines a light on just how good that band was. “Give It” is turned into a sing-song with the audience, but it exemplifies the attitude. His guitar, out of tune, won’t play ball. “Who gives a fuck?” asks Sorry, “this is a rock show”, and its about the love of the rough edges. “Black Dog Dancer” has the air of The Hold Steady, but the show as a whole has the feel of a celebration – of life, of music and brotherhood. Scott Sorry personifies it all.

CJ Wildheart, is he reasons, “shy”. But, he’s front and centre of the stage when he follows it up with the thought that “but I have had quite a long career in music to celebrate.” He’s not wrong, and his just out “Lives” underlines it. A sort of Best Of, a theme this set takes and runs with. After “Peeking Duck” and a furious “State Of Us”, we (and I mean that in a collective sense) get nostalgic with “Lemonade Girl”. A tune from The Jellys – merely one of the brilliant bands he’s been in – that I haven’t seen played live in decades, there comes “Hit It On The Head”. A b-side by the band that binds this all together. My favourite band, probably the favourite band of most of the crowd, but no one seems ready to say it out loud (“you can, we haven’t fallen out that badly…..” smiles CJ). One thing “Lives” has done is focus minds on how much talent CJ has. “F.U.B.A.R” a solo one, “Sitting At Home” – from another of my favourite bands, Honeycrack – has a different dynamic now without the melodies of Willie Dowling, and Ben Marsden (back for a second stint) Lee Wray, Dave Norris and Craig Mackay on drums, have a heavier feel. It suits stuff like “50 Percent Indian” too, and “Go Away” (Honeycrack’s standout moment) is so good you can do it however you like, and it’s something of a treat to hear “Milk And Honey” too, from The Jellys canon. There’s another b-side from the other band, “O.C.D” is proof that their EP’s were works of genius.

And, as it only could, it ends with a sort of Wildhearts reunion. Sorry and drummer Ritch Battersby (GTA founder member) are together for a couple of covers that the band did, “People Who Died” and the punk makeover of Warren Zeavon’s “Carmelita”, before “Little Flower” (one for the completists – and there are many here!) and “The Only One” ends a fabulous night.

The three ex-Wildhearts take their bows, but it’s something Sorry said that resonates. “When you leave here, life will be there”, he’d yelled. “Forget the negativity, think back to in here, live with positivity and do it right.”

That was this gig. That was the atmosphere, this felt like a load of mates having a jam to their specially invited friends. As a consequence, it was an uplifting experience. To some it might be “just” music. It didn’t feel like that in here.