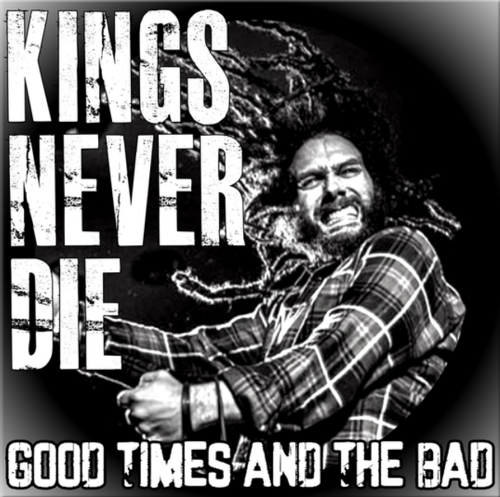 I am, in all candour, not the best at reading band bios and supporting material. I mean no offence when I say that. Merely, it’s a fact that I like something. Or I don’t. And if I like it enough to write about it, then I try and find a way of convincing you that you should like it too.

That’s it. There’s no trick to it. No fake nonsense here.

So I am aware of two ironies. First, the most read review in the eight years I’ve done the site was one where I wrote about a concept album. “The story bothers me not a jot, the only thing that fusses me is whether the songs are any good.” And second, it was reading the supporting material for Kings Never Die that I saw this quote: “nobody really cares what you’ve done when listening to a new band, It’s all about what we’re doing. Of course, we respect our personal history and the great people and bands we have been a part of, but Kings Never Die is and always will be meant to stand on its own.”

That’s the band in their own words and that’s one of the (many) reasons why “Good Times And The Bad” is so excellent.

As I’d said when I reviewed their last effort just before the pandemic, the members of KND have been there and done it, and got the moshpit scars no doubt. Murphy’s Law, Mucky Pup and Dog Eat Dog are just a few of the bands they’ve been in, and that skill, all the laser guided fury that you’d expect is all the way through these four tracks.

Yet, like the last one, there’s a sense of melody here too, This isn’t just rage for the sake of rage. “Rally” is brotherhood written large, “united through and through” the gang all screams, and that line seems to underscore the whole thing.

Vocalist Dylan Gadino has the perfect “hardcore” voice too. Like he’s spitting fire and would fight to the death to protect you, “Side By Side” is as good as it gets, and twin guitarists Larry Nieroda and Dan Nastasi can kick out a riff that’s as fast as lightning but has all the power of an old school thrasher too. When it all comes together as it does on “What You’re Made Of” it’s a thing of brutal beauty.

More Agnostic Front than Terror (if you’re looking for your hardcore reference points) Jotham Oliver joins on vocals for the brilliant title track, which looks back on a life in this music with some considerable pride.

And to return to the quote from the band, that’s why no one will care who they are and who’s in the group. Simply put its abundantly obvious that Kings Never Die are lifers in this sound. As a consequence, perhaps, “Good Times And The Bad” is as good as hardcore is going to get right now.