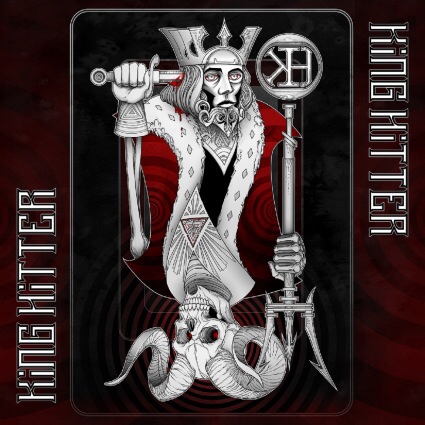 When Corrosion Of Conformity released “Blind” back in the early 1990s, the singer they choose was Karl Agell, more recently he’s appeared in Leadfoot, and it’s here that sees the initial genesis of King Hitter.

Joining Agell in this new endeavour – one that made it’s live debut last June, and is just getting round to releasing material – is Leadfoot guitarist Scott Little, not that there is too much Southern Fried rock n roll on show here.

As you’d expect from James Lugo, the man who produces this album and has worked with the licks of Fuel,  this is meaty stuff, more COC than Skynyrd but not afraid – as on the brilliant “Feel No Pain” – to add a touch of Thin Lizzy style double guitar melody.

Before “…..Pain,” which is track three on this rather excellent collection, there is the strident opener of the eponymous song, which busts out at you as though it has urgent business to attend to, as it’s chorus finds them “smiling toothless in the sun.”

Other quite obvious highlights are the early Alice In Chains sounding “Suicide” which has a dark groove to match it’s opening line: “suicide is the retirement plan” before it too has a Lizzy-esque freak out before the end as Little and Mike Brown mesh perfectly.

The short, sharp five tracker ends with perhaps it’s heaviest moment, appropriately enough titled “The End” which rumbles on a fine backbeat laid down by Jon Chambliss on drums and Chuck Manning on the bass.

The accompanying press pack for the album said the songs here were: “familiar yet fresh” and you know what they mean. That is to say that “King Hitter” could have been released at any point in the last 20 years and still sounded current. It will be interesting to see what they manage on a full record, but this is a fine start.