REVIEW: THE KENTUCKY HEADHUNTERS – ON SAFARI (2016) 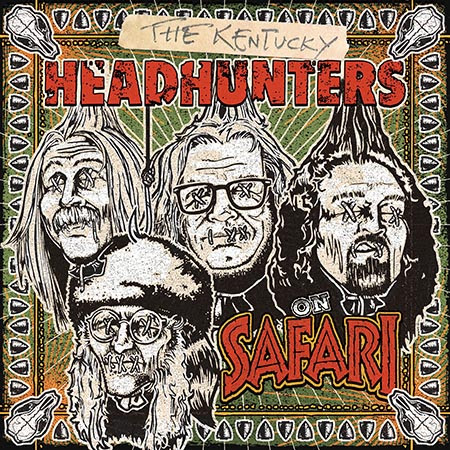 Back in the summer MV found itself at a show on the first ever UK tour by Southern Rock veterans The Kentucky Headhunters. We remain suckers for this type of thing and couldn’t pass up the chance to see what is almost the lost band of the genre on these shores.

The reason for the absence is glorious. Richard Young, the band’s guitarist, sometime singer and dad to John Fred Young, drummer in Black Stone Cherry, doesn’t like flying, but his son pushed him to get in the sky and share the band’s music with the wider world.

And that wider world has most definitely informed the song writing on “On Safari” – the bands 12th record – on “I Am The Hunter” for example, they are searching for the higher life, on “Caught In A Dream”, the song which follows and is very much its partner, they decide that is a Butler and a trip to Spain.

And actually there is a wonderful air of contentment throughout this jaunty, breezy little gem of a record. “Crazy Jim” a bluesy ballad – lets be honest, it’s not too dissimilar from “Ballad Of Curtis Leow” has an innocence about and a simple plaintive cry of harking back to a different time.

A time, which evidently still exists in Dixieland. Like all Southern Rock bands, whether it’s Skynyrd, or their more modern offspring Blackberry Smoke, Whiskey Myers and Cadillac Three, or even the more country Drive By Truckers they are capable of mytholgising the area. They do so  to the point where even this reviewer, sitting in the West Midlands, thinks of the Mason Dixon line and Muscle Shoals as some kind of home.

“On Safari” does little to assuage this.  “Beaver Creek Mansion” – the magnificent slice of groove that kicks this off  – soon has “kids swinging on a rope and a tyre” in K.E.N.T.U.C.K.Y while we sit on the stoop eating Sweet Potato Pie. “Deep South Blues Again” likewise knows where it’s from, and “Lowdown Memphis Town Blues” absolutely cheerfully reinforces the point over a gorgeous, lilting refrain that is as uplifting as it is superb.

The southern country blues is always going to sound magnificent – when its done as well as well as this there really is little better.

Perhaps the best actually, is “Jukebox Full Of Blues” a simple honky tonk of a thing paying homage to all the greats, sounding like an Elvis song from the 1960s and being all the better for it. Although the absolutely mighty “God Loves A Rolling Stone” with its all traditional country flavour runs it close.

The simple fact about “On Safari” – which finishes with “Governors Cup” an instrumental just because it can –  is that the four men who made it could only make this record, they wouldn’t even want to sound like anything else, and they are brilliant at it.

The Kentucky Headhunters might never have the arena selling potential of a BSC,  the outlaw feel of a Blackberry Smoke, or the record sales of a Cadillac Three but they might be the best of the lot.