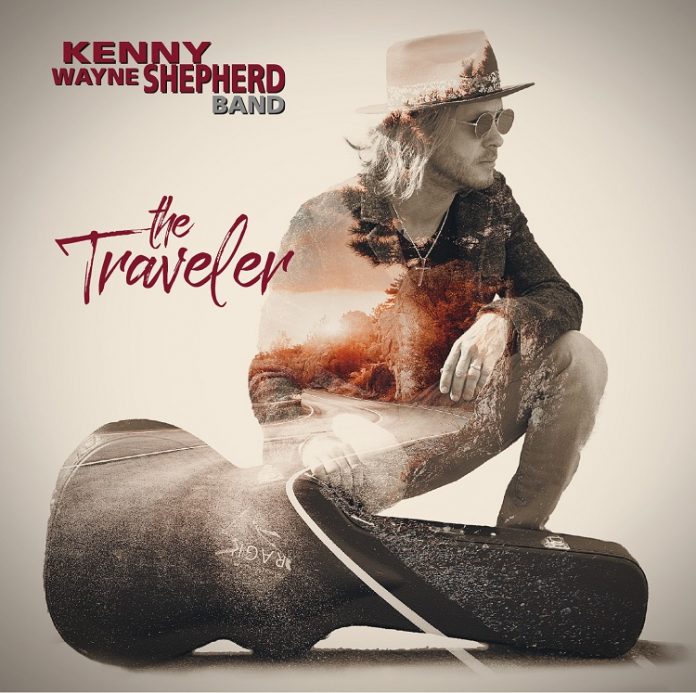 Right towards the end of “The Traveler” (sic) there’s a gorgeous slice of pop music called “Better With Time”. Shot through with the Louisiana sunshine – or at a push the laid back air of California where this was recorded – it is ostensibly one of those songs about feeling more comfortable in your own skin as you get older, but it means so, so much more.

First, it is carefree, so much so the closing vocals, without a hint of irony merrily do a “do, do do, do,  do” bit to match the riff.

This sort of stuff would never have been on Kenny Wayne Shepherd’s early records – nor would the vocalist – himself.

The reason, actually, for starting as I have deep down in the deep cuts, is all of those things help explain where KWS is in 2019 and conversely why “The Traveler” is so very, very good.

Because this is about growth. As an artist, of course, but as a person too, and that feeling is all over these 10 songs.

“Woman Like You” opens this in the a funky, sassy, yet entirely simple type way. His long time singer Noah Hunt delivers lyrics about wanting a woman that is “looking so sweet with a badass attitude” who has “made a Southern man want to put you in a song” and ok, its not breaking any new ground, but it’s not supposed to be. It is confident, classy and entirely understands its lot in life.

The lead break is a scorcher too, and make no mistake Shepherd is still almost without peer in the playing stakes, but these are songs first and foremost, not excuses for KWS to show off.

“Long Time Running” – like the opener – adds a horn section for a bit of depth, and if you’re thinking of Joe Bonamassa here then that’s cool too. KWS is the only modern blues man that gets close. And actually, he’s stopped being a “blues man” as such long ago.

The genre informs these songs rather than shackles them. “….Running” has a chug about it before he cuts loose, “I Want You” dials up the soul, and it is the mark of KWS’ confidence that he takes this one himself. He might not sing “like Muddy Waters” as he jokes in interviews, but this one is a little bit special.

“Tailwind” is as southern rock as it gets – and gives the record its title – “when fiction ain’t stranger than the truth, turn the page” offers the thought here and the confusion of 2019 is nailed, right there.

“Gravity” which begins with the warning “jump in the waters fine, five words that could change a life” has – to these ears at least – the air of one of those late 1990s US Rock Radio bands that I used to love, like Matchbox 20 or Goo Goo Dolls and the superb piano takes it somewhere totally different.

“We All Alright” lays down some real dirty blues, to go with lyrics that are – for the first time on a KWS song (I think…..?) delivered as a duet with him and Hunt, and the glorious chorus wedges itself in and won’t let go.

“Take It On Home” is the type of thing that leaves blokes like me from the middle of England longing to live in the Deep South of the US, right down to the “spot beneath the magnolia tree” and “the little white house down the gravel road” which sounds so idyllic. If he gives this to labelmates Black Stone Cherry, then they’re both sticking another wing on their houses, to be honest.

It is bewildering how many styles that they all fit on this. “Mr. Soul” rips, and the lyrics are interesting while the vibe is pure Rolling Stones, but even on a collection as good as this one, there has to be a standout, and that’s right at the end here. “Turn To Stone” is a brilliant bookend, his “state of the union” if you will,  and the fact that ends with a magnificent solo is a point lost on no one. It’s Kenny Wayne Shepherd saying: “we’ve all had our fun, this one is mine….” And he nails it, he really does.

“The Traveler” is the best representation of where KWS resides right now. Wherever he’s been and gone has helped shape it, but it sounds like he’s really home.

Previous article
BAND OF THE DAY: TAKE TODAY
Next article
NORTHTALE TO TELL