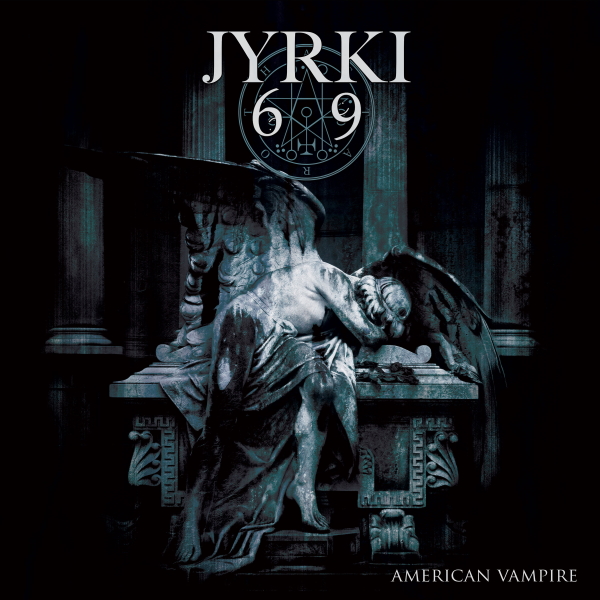 There’s only one song on “American Vampire” that sees  Jyrki 69 share the vocals, so we’ll start there.

There’s a lot of covers on the record, but there’s one that stands out above all. “Don’t You Want Me” once of the Human League, but owned here by the 69 Eyes man. He’s joined by Tiffany and (forgive me, its difficult to separate my adolescent fantasies from reality here) its the sort of thing that is (I imagine……) pumping out in underground S and M clubs when things get proper seedy.

There was – I promise –  a point to my perversion here (ok there wasn’t, but I’ll pretend there was) – on “….Vampire” – Mr. 69 gets proper sleazy and even more gothic than normal.

That’s evident from the opener. Shotgun Messiah join him to reprise their own “Sex, Drugs and Rock N Roll” and turn it into something that Billy Idol might do when he finished yelling to the rebels. It’s the most out and out rock n roll debauchery here, there other debauchery is more subtle.

Speaking of the boy born as William Broad, his long time mucker Steve Stevens joins on “White Rabbit”. Taking the Jefferson Airplane way of doing it merely as a base, it is not so much blissed out, as the product of a nightmare trip. More than that though, it’s a brilliant example of what this album does. There’s no note for note covers here.  Rather, “Dreamtime” takes The Cult and makes it sound like The Sisters Of Mercy being played on a Casio Keyboard, hell even the punk classic “Bite It, You Scum” (done here with Leæther Strip) sounds like a Prodigy song here.

The title track ushers in some original material  – don’t tweet me if they are obscure covers, I couldn’t care less to be clear – sees Tim Skold make a second appearance. He’s also in Shotgun Messiah, this is his industrial alter ego and its barren and nasty as you like.

Brit renegades the KVB appear for the quirky and nihilistic “Decision”, on which 69 offers up vocals that are equal parts Danzig and Tyla from Dog’s D’Amour, its pulsing, lurking thing is at odds with some of the more immediate ones.

Xiu Xiu are suitably experimental as they provide the 80’s sounding soundscape for the brilliant “Deviant Carousal” (and I’d wager Jyrki 69 knows no other kind!) and an example of how far this pushes the envelope comes on “Clover” done with Scottish Producer Youlooktired, and there’s a thought throughout that this is more at home at the dance club than a rock album. That’s its appeal, too.

The bookend of the record sees Skold making his third appearance, this time as part of Not My God, and they ensure that “You Look Tired” sounds like something in between Marilyn Manson when he was trying too hard to be weird and one of those remix albums that Rob Zombie used to do.

Whatever I was expecting “American Vampire” – the follow up to 2017’s “Helsinki Vampire” – to be, it wasn’t quite this. Don’t listen to it if (to paraphrase Tiffany) you think you’re alone now, because This is industrial scale nastiness mixed with some genuine terror.