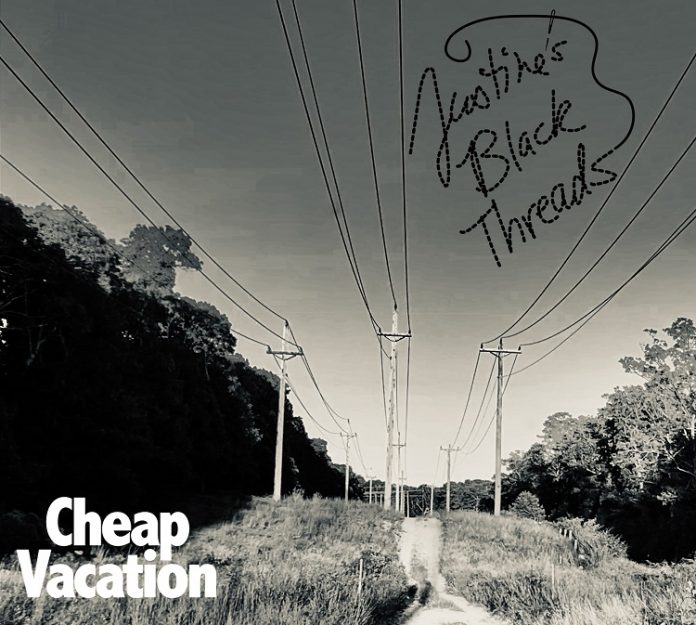 Justine Covault is best known on these pages as the leader of Justine And The Unclean – who’s “Heartaches And Hot Problems” I got pretty excited about in 2018.

Whilst the name here, perhaps indicates a different side to Covault, her “Black Threads” though are still far from pristine.

This is the “country” of the Sun Studios type, the sort of thing that Elvis did when he rather revolutionised the world, and up to a point it is just that. Goodness,  Justine’s voice and the stellar couple of players she’s got with her – Johnny Sciascia on upright bass and harmony vocals and Jim Scoppa on guitar have a wealth of experience and no little skill (Sciascia is in the wonderful Jittery Jack) – ensure this is authentic and brilliantly played, but the word “country” I dunno, man, doesn’t seem to do this justice.

See, when I think of old time country, I think of the Grand Ole Opry, all them legends doing all them wholesome things. This? The closest this gets to the Grande Ole Opry would be having a quickie in the back alley to be quite frank with you.

“Cheap Vacation” starts as it means to go on. “He Never Reminds Me Of You” sounds like it’s from a bygone age, no doubt (but that bass, always makes me think of The Stray Cats), but its catchy and there is a real bleak, gallows humour about the lyrics.

If you like that then step right up, because it gets even better. “He Stopped Laughing At My Jokes” – maybe the sequel to the opener. After meeting an attractive man in the bar, she recounts the tale of how she met her current beau: “that’s how I ended up with tall, dark and humourless”. That’s a great put down, but “you listen to Devo, man that stuff gets old. Just like you and me, man.” Is the final nail in this.

Couvalt always strikes me as a woman you’d like on your side rather than against you, and “You And Me Against You And Me” is striking given that it isn’t country really, its like the antidote to one of those saccharine 60s pop songs where boy meets girl and they fall in love.

“Other Side Of A Six Pack” is a fun little romp around in the honky-tonk, and the closing “Needles And Pins” is more of that 60s sounding stuff – it doesn’t sound too dissimilar to me from The Mamas And Papas, it really doesn’t. Which is why I said it was only country “up to a point”, given that these threads fray all over the place.

Wherever they go, though, they can’t hide the fact that Justine is talented, resolutely original, and there is something just a little scary about her too. A rock n roll rebel spirit that bubbles just below the surface.