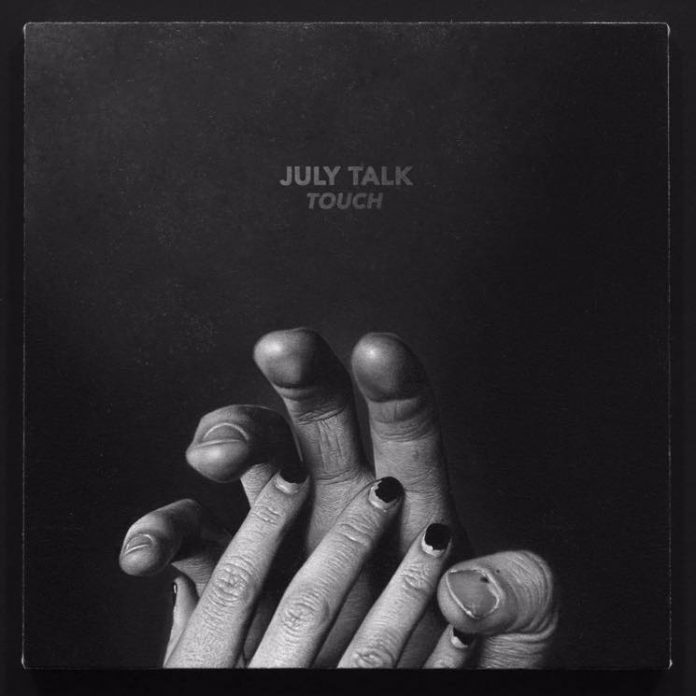 Damian enjoys the new one from Canada’s alt-rockers

July Talk is a Canadian blues / alternative rock band formed in 2012 in Toronto.

The band consists of singers Peter Dreimanis and Leah Fay, guitarist Ian Docherty, bassist Josh Warburton and drummer Danny Miles.“Touch” is the follow up to the band’s self-titled debut released in October 2012.

“Picturing Love” kicks off the album with a pounding drum and a keyboard riff before Peters gruff grinding vocals almost scream out the down and dirty lyrics of this track. Partway through, Leah’s haunting vocals grow from a gentle background noise to challenge her colleague with her own brand of sleazy lyrics. The song continues with the two singers bouncing off each other and together.

A wonderful drumming beat very reminiscent of the Glitter band opens up “Beck + Call” with both singers complementing each other vocally through a song that has a lot going on. I’m sure I could even hear panting in the background. “Now I know” is a much softer track with the guys trading and sharing lyrics throughout. “Johnny + Mary” races along at one hundred miles an hour and wouldn’t stand out of place on a Ministry album. A complete contrast follows with “Strange Habit” which is a really laid back almost ambient offering. Some spooky tinkling piano keys add to the intensity of this song. Peter’s voice had a Serge Gainsborg quality about it. “Push + Pull” starts off really quietly and builds into a cracking slice of rock. Another great rock out number in the form of “Lola + Joseph” follows with Leah’s and Peters vocals balancing each other out.

“So Sorry” is almost a throwaway song and had elements of the Ting Tings within.

The penultimate song “Jesus Said So” is probably the most accessible track on first listen and I would guess is inspired by Nick Cave, whom it seems to nod to at times.

“Touch” the title track of the album is also the track that closes it out. It’s a slow burner at first but builds up vocally and musically and is a great way to not only highlight what great musicians these guys are but what a couple of extraordinary vocalists that the band has.

We all like to pigeon hole bands but these guys are a little more difficult to put your finger on.

There are influences and inspiration from the likes of Nick Cave, Tom Waits, Arcade Fire but I heard vocal similarities to diverse artists such as Chris Rea and Andrew Eldrich from The Sisters of Mercy.

But saying that this band are very much ploughing their own furrow and I’m sure these songs would go down a storm in a live setting.

They may be called July Talk but I’m convinced we’ll be talking about `em all year round.