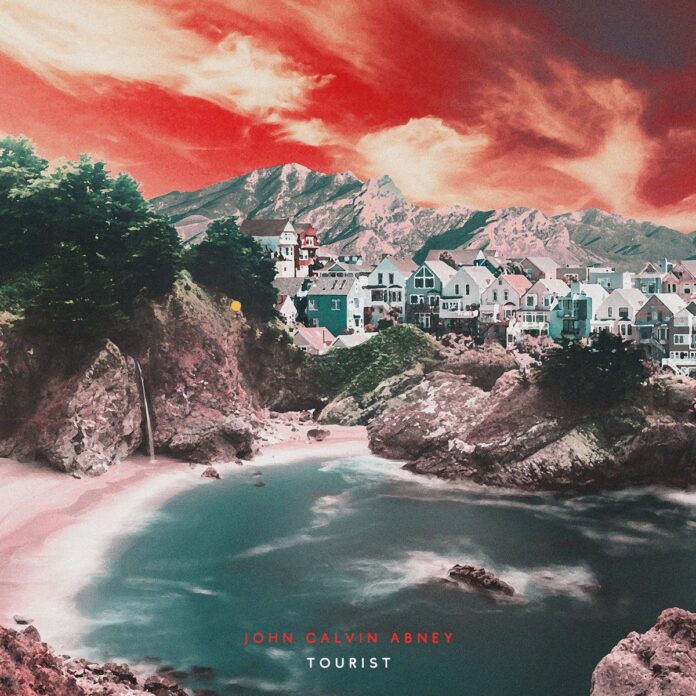 John Calvin Abney is an American musician, songwriter, and multi-instrumentalist from Tulsa, Oklahoma who releases his latest album `Tourist` this month which was recorded in an assortment of rooms and hotels across California, Nevada, Texas, and Oklahoma.

Throughout `Tourist`, the songwriter meditates on death and departure, companionship and camaraderie, weather, and warning, weaving a number of the characters he interacted with through this time – from kind friends to passing strangers – into the narratives strewn throughout his lyrics. Each song reconciles with the fact that everyone enters this world and everyone exits, in one way or another, without exception

The album opens with `Full Moon Friend` which is a quite gentle almost dreamy introduction. A fairly introspective number that has piano, a steady drumbeat and subtle guitar chords shared throughout It has a brief jam like section as it reaches it`s conclusion. There a more weighty feel to `Call Me Achilles` which reminded me of a laid back version of  Bachman–Turner Overdrive`s `Taking Care Of Business`. It`s a song that reflects on past weaknesses while making plans for a fresh start.

I read that `Holy Golden West` is about feeling out of place in this world and the title a metaphor for comfort, paradise, or safety according to the singer. It`s another melodic calming quite mesmeric offering with a delightful piano refrain shared throughout. I have to say that `Watch Me Go (Back in Time)` really sucked me in and I found it quite spellbinding. A reflective musing with some really sweet harmonies shared along route. The signer has said that the song “speaks of our ubiquitous desire to go back in time and change events instead of accepting how the cards fell and moving forward”.

`By Your Leave` is a submission that I felt was a type of tender love song or at least yearning or desire for someone and if i`m honest was so enthralling that I kind of drifted off in my own thoughts and recollections. I wasn`t too sure about `Long Black River` it had an odd constant beat that I thought deflected a little from the song that is another quite thoughtful rumination.

`Leave Me at the Shoreline` rolls along with a leading drum beat and piano keys sprinkled throughout. Another life evaluation that concludes with the artist recognising that they need a holiday or at least a break from their day to day existence. I was reminded of the quite contemplative lo-fi songs of Elliot Smith while listening to `Sleepwalkers` a composition that will stay with you long after it has ended. The piano twinklings, synth like tinges and sound of the guitar frets all added a further poignancy to this track.

The album closes out with `Good Luck and High Tide` which retains that tranquil and meditative mood which is prevalent on this release.

The singer has said that he sees `Tourist` as a companion piece to his 2020 `Familiar Ground` LP. This release it has to be said is much lighter and a touch more serene than his last release but none the less appealing.

John Calvin Abney is an interesting songwriter with a quite unique voice that evokes a number of emotions and `Tourist ` goes some way to demonstrating his considerable talent.