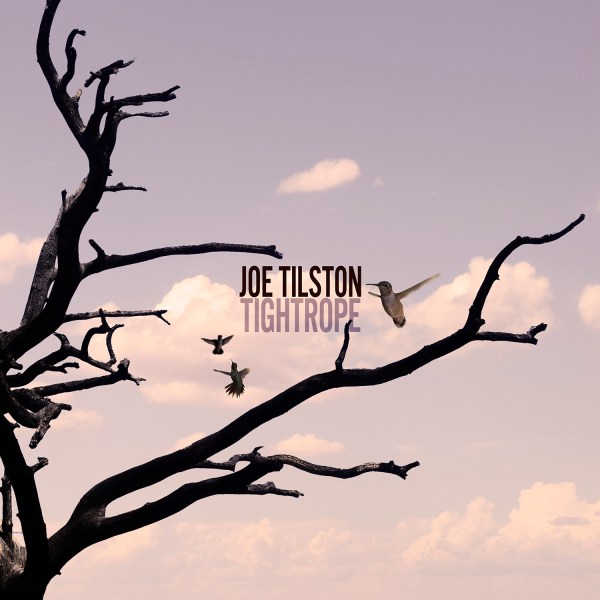 Joe Tilston is the son of Steve Tilston and Maggie Boyle who along with sister Martha Tilston was brought up in and around the English folk scene. He is the bass player in ska / punk band Random Hand. A punk at heart but his music is more folkish and he has a new album out this month `Tightrope` the follow up to `Embers`. This release is full of songs of Death & Hope.

The album opens with `A Love Song` and I have to say it was glorious. It`s a kind of dreamy mesmeric number which has a steady drum beat and some delightfully intricate guitar chords. There`s a kind of delicate beauty about the vocals which enjoy some complementary backing harmonies at the chorus with lyrics that portray a quite painful honesty. I have to admit I did hit the repeat button a number of times before I moved on to the rest of this release. We have a faster pace to `Flowers` which is a cracking foot tapper of a number which has a quite profound chorus line of “tick tock goes the clocks that you`re watching, doesn’t seem to move that fast doesn`t seem to move at all, tick tock goes the clocks that we`re all watching, why do we want them to move at all”.

`Armistice Day` is a number that seems to be a reminiscence or recollection from a soldier who led men into combat and his reflections. It felt almost like a rallying cry or call to arms at times. The occasional use of a trumpet gave it a quite enigmatic poignancy. We have a song written for the singer`s wife Kayley with `Evergreen` a calm and captivating piece with just a strummed acoustic guitar and piano keys allowing the vocals to really shine.

`Minutes To Midnight` builds and blossoms as it progresses and would seem to be an observation on the state of the world we live in and how we are running out of time to make changes to halt it`s destruction. There was some delightful vocal interplay on `To Continue Press Start` between Joe and Tia Kalmaru. A number that possibly relates to a relationship that has drifted apart. The sense of loss is almost palpable in the vocal delivery from both parties and the simple line “since when did we dance alone my friend” is almost heart breaking and sums up the situation in a few succinct words.

`Eyes On The Road` begins with Joe`s unaccompanied vocal before a grinding guitar riff pulls us into this number. A track that possibly reflects on a relationship that is almost abusive and the female victim doesn`t seem to have the strength to leave. A difficult listen at times but relayed over a quite at times dreamlike come ethereal musical backdrop. There`s a much more folky vibe to `Mirror Mirror` which enjoys some charming violin swathes throughout. It seems to almost stop midway for an instrumental segment before resuming with quite distant vocals and the violin wonderfully leading us through the rest of this journey.

`Rains` opens with a strummed acoustic guitar and vocals before a violin and drum join. It`s an anxious edgy presentation that has a real potency about it, a sort of calm before the storm.  The lyrics almost hint at an impending apocalyptic event. There`s a nigh on stream of consciousness texture to the lyrics and the song builds in intensity and volume as it evolves. We close out with `Walking On Walls` a quite introspective musing with acoustic guitar and vocals and when the flute is added to the mix it becomes even more haunting. An intriguing number to end on.

This album was presented as “a collection of songs inspired by Loss and Hope, every challenge we face, a tightrope walked” and it`s this and so much more. It`s an outstanding thought provoking listen that will stay with you long after you`ve heard it. This artist has employed the talents of some wonderful musicians in Luke Antonik-Yates (electric guitar, violin), Tia Kalmaru (vocals, backing vocals, flute), Joe Dinsdale (bass), Andy Hawkins (piano), Simon Dobson (trumpet) and Sean Howe (drums) to bring his vision to life.

Joe Tilston has a quite unique vocal style and I thought `Tightrope` was a stunning introduction for me to this gifted artist.