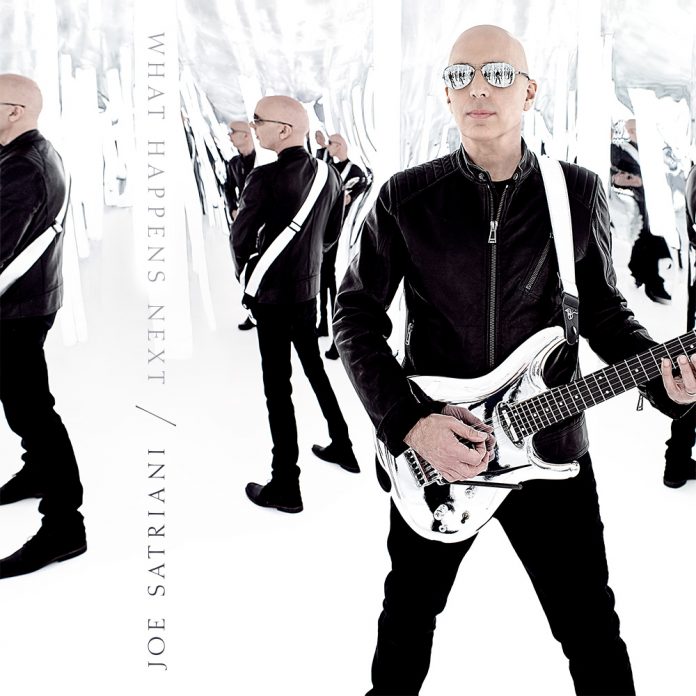 Guitar god Joe Satriani takes another peak into the future on studio album number 16.  As always the future is brighter than ever before.

Having made a career out of proving words almost meaningless when compared to the power of music and now at 61 years old,  guitar genius Joe Satriani,  appears to be maintaining a creative peak that has stretched over several years and shows no signs of fading.

It is getting increasingly difficult for a man who once blazed a trail for guitar virtuoso’s the world over to keep up with the younger breed and keep himself at the very front of the pack.  Somehow though he keeps on doing just that and leaves the pretenders to his throne trailing in his wake.

It is not just the technicality on show from Satch that sets him apart, players like Steve Vai, John Petrucci, Yngwie Malmsteen etc can claim to be equally as proficient in their six-string as Satriani is and they would probably be right.  However, it takes more than that to be a leader of the pack and his uncanny knack for knowing when to play and when not to is unmatched, as is his ear for melody and willingness to sacrifice showmanship for the music.  The others mentioned have that quality also but you would imagine it’s from Satch where they draw that understanding.

Joe has some esteemed friends to call upon for his latest effort including Chilli’s drummer Chad Smith and legendary bassist Glenn Hughes to form a formidable power trio comporable with the great trio acts of all-time.  However, despite the star-studded changes to the studio line-up it is always Satch himself that shines the brightest.

Kicking things off is “Energy” a track that does what it says on the tin if ever there was one.  Dynamic and tight grooves lead perfectly into the retro-funk of “Catbot” which fits right in with Smith’s day job.  The slight distortion allowing Satch to really let loose with some of his most natural rhythmic playing to date.

Satriani himself describes the mood and feeling of the album as “pure rock and soul” rather than the ethereal and progressive nature of 2015’s Shockwave Supernova.  Mike Fraser is back behind the desk and is well versed in Satch history thanks to his frequent collaborations in the past.  He knows how to achieve the maximum sound from Joe’s playing and he comes up trumps again.

Throughout the album there are different shades of Satriani as tracks like “Thunder High On The Mountain” deal in the epic nature and vision of the Satriani sound, and wouldn’t be out of place of a modern day Iron Maiden album, whereby “Cherry Blossoms” is a delicate soulful number showcasing the beauty and fragility his music evokes.  The soul side is provided by “Smooth Soul” which harkens back to the glory days of the 1950’s &  60’s and there are more than a few Jazz inflections on “Invisible” which delights and invigorates in equal measure.

Overall this is another superb example of Satriani’s talent and his ability to keep on moving forward and challenging himself and the listener to break new ground.

What Happens Next is set for release, January 12 2018 on Sony/Legacy Recordings.