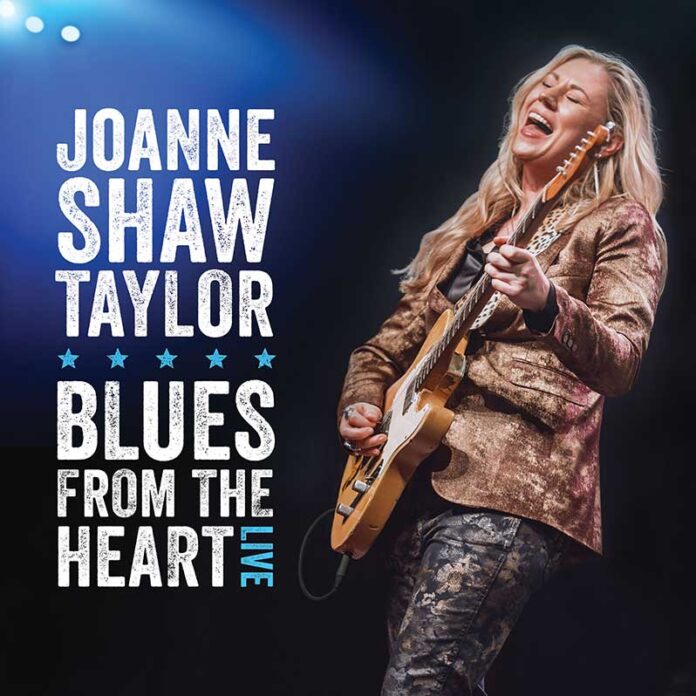 There are some artists that you are pre-disposed to warm to even though you don’t know them at all. Joanne Shaw Taylor is one of mine. Back in the days when I used to do interviews I talked to her. She and I share a hometown (she lives in America now and can call on some of the world’s best blues players to do her record, other than that, we’re just the same….). She was engaging, funny, and we had the same accent.

I’d  been a fan for years before that, but it wasn’t until the album she released last year that  – in my opinion – JST finally made the classic record she’d always threatened.

It was a covers record. Simply titled “The Blues Album” and it saw Taylor get together with Joe Bonamassa and his producer Josh Smith to play some songs that had been handpicked for her voice. A covers record it might have been, but my goodness it was a cracker.

This was all underlined by the show I saw her play in the spring. That gig in Coventry, I wrote [saw her give] a timely reminder on how to maintain a career and to re-invent as you do so – and she’s perhaps never looked happier or more comfortable.”

Which brings us to “Blues From The Heart: Live” – a CD and DVD set, I have to be honest that I am a terrible watcher of concert films so I’ve only listened. It’s essentially a run through of what made that night in Coventry so special, with some stardust sprinkled about.

For The Empire substitute The Franklin Theatre in Franklin, Tenn. It might be a former DW Sports in a shopping centre too, but that’s not how I imagine it. More importantly, that gig was Joanne’s first live performance in two years (staggering really given how much time she usually spent on the road before the pandemic). It was broadcast on TV in the US.

Ultimately, though, all that matters is that it sounds sensational.

Beginning with the first three from “…..Blues” (“Stop Messin’ Round” is genuinely brilliant) the enjoyment of the evening absolutely bursts through. Jimmy Wallace (keyboards, piano) is particularly impressive here.

The sultry vocals that JST has always had are perfect for the horn drenched “If That Ain’t A Reason” while the timeless “Keep On Loving Me” is as jazzy as anything on a New Orleans second line.

There’s a soul on “If You Gotta Make A Fool Of Somebody” (Kim Fleming and Devonne Foulkes’ Backing Vocals are a touch of class in that regard) and there’s special guests all over the place. Kenny Wayne Shepherd rips a solo out of his back pocket on “Can’t You See What You’re Doing To Me” and Mike Farris takes “I Don’t Know What You Got” to a different level.

The thing is though, that the guests (of which more later) only augment and never steal the show, because JST (and her band – also including Rob McNelley (guitar), Steve Mackey (bass), Nick Buda (drums)) are the genuine stars.

“Two Time My Lovin’” is – like at Coventry – a fun romp with what Jo termed herself “a terrible message” and “Three Time Loser” is a kind of Faces style slice of rock n roll here, while “Dyin’ To Know” (one of her own tunes) is turned into a real stomping thing.

Indeed, the sprinkling of her own songs is so well done that “Just Another Word” and “I’m In Chains” take on an almost new life here, while the cover of “I’ve Been Loving You Too Long” is an absolute beauty.

And so we arrive at the encore. Where, playing the part of “Jo Bo” as JST puts it, is Joe Bonamassa. First they duet on “Don’t Go Away Mad” as they do on the blues record, then there’s a gorgeous “Summertime” and there’s a truly mighty “Only You And I Know” from Dave Mason of Traffic’s solo record. It sounds suitably joyous and ends an occasion that can best be termed the same way.

It seems odd, perhaps, to say that the rebirth of Joanne Shaw Taylor began when she looked back for inspiration. That, though, is how it seems, and “Blues From The Heart” is as superbly named as it is played.